Facebook pushes fundraising as an essential part of your "online reputation" 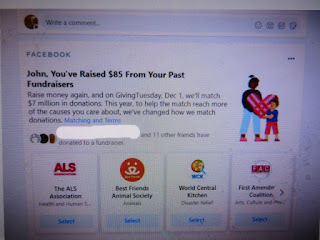 Here we go again.  Facebook is trying to have a money-raising contest on Giving Tuesday, Dec. 1.

Yes, we should be giving, and I can think of a lot of “causes”.  But I still have a problem with the “quid pro quo” idea, that you are supposed to become part of someone else’s speech to have your own, which seems to be where we are headed.

The illustration shows I have done four fundraisers (ALS, World Central Kitchen, Best Friends Animal, and First Amendment Coalition).  Actually, I think I did ALS and FAC.  The others I probably donated to.  I think I did another one for protecting journalists.

I would have a problem with having a personal reputation as someone begging for money all the time online.  Or writing messages to sound personal, when I have no right to presume such a personal relationship.  (“Truthout’ is one of the worst offenders for email, crying that is about to go under every two weeks.)

I do feel differently if I have a very specific, personalized connection to the issue and spend time and effort on it.  For ALS, I had one cousin pass away of it, another has it, and I might have the warning signs of some sort of non-progressive variation of it (like muscle twitches). So I did that as a birthday fundraiser.

One the food issues, it’s complicated.  Right now, most non-profits don’t want persons over 70 working on their premises.  That would change with a vaccine.  It might even change with a pseudo-vaccine (like MMR, which is surprisingly effective according to a UK study and little known), or if some sort of protease inhibitor turns out to be an effective prophylactic. So the obvious reaction is, well, you can raise money in public for us.  That’s no good if I’m not involved otherwise.

OK, get over it.  What if something happens to me, say, because others don’t wear masks and don’t have an obligation to me?  This can quickly escalate into an existential crisis that determines how you die and what legacy you leave.

The food charity of choice would be “Food and Friends” in DC.  But that doesn’t work now because I backed out of an auto delivery Thanksgiving when I found out I would have to venture into a crime-ridden neighborhood.  Cowardly?  But if something happens, that’s it.  I don’t belong to anything.

Covid is certainly challenging out ideas of “personal responsibility” and personal agency in a way HIV never did.

I created a fundraiser for The Innocence Project.  That is justified by the fact I have some credible connection to it outside of Facebook (which is pretty much my standard for participation in this mode).