Partisanship plays tug of war with tech executives at Section 230 hearing, and severe crackdown on tech sounds likely in 2021 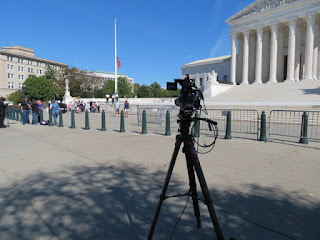 The media is focused on the Republican’s pre-election ploy in the Senate Commerce Committee hearing Wednesday Oct. 28  on Section 230 of the 1996 Telecommunications Act. I wrote up the details and provided the link of the entire livestream here.  The title was “Does Section 230’s Sweeping Immunity Enable Big Tech Bad Behavior?”  The tone of the hearing was not good.

Vox Recode has a story by Sara Morrison to the effect.

On The Verge, which Vox owns, Casey Newton writes that Senate Republicans want to make the Internet smaller.  The article notes that the FOSTA law of 2018 was not mentioned.

But the Democrats repeatedly said that the platforms need to censor more, because there is a lot of incitement of naïve and unstable people (call it radicalization).  The recent plot against the governor of Michigan (and Virginia) is case in point.

All in all, the future of user-generated content in the next term (whoever wins) does not look good. An underlying problem is that a lot of it is gratuitous, which can really get confounded during a pandemic.

Along these lines, I thought I would share a PDF paper on voter suppression from the Center for Democracy and Technology.  CDT talks about “misinformation”, “disinformation” and “malinformation” as different things.  I miss the days when we could go to their all-day events (often in December).