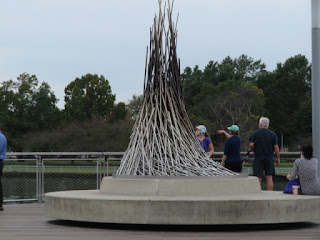 OK, we are hearing authorities and major media describe the extreme right as a possibly grave threat to US nation security and ordinary citizens, possibly on the level of radical Islam of a few years ago.

The same is not being said of the very radical Left.

That’s true in general.  The large attacks (Christchurch, El Paso, even Charlottesville) have come from people who do believe in white supremacy or subscribe to oddly collectivist ideologies like “the great replacement” (population demographics). But authoritarian leaders overseas (even Putin) push these ideas.

But there have been mass attacks from far Leftists (Dayton Ohio) and isolated shootings.

But generally the radical Left tries to “make it personal” by social harassment (cancel culture), or by vandalizing of businesses or trespassing near homes, or by “forced” recruitment, like in outdoor dining areas.  There is a certain vindictiveness that goes beyond just indignation. This is also reflected in a lot of street crime.

Policy is a mixture of economics and philosophy.  Actually, to have steady capitalism work, you have to have some stability and you do have to provide a decent safety net.  If we had single payer health care (or strong hybrids like Germany or Switzerland) the “ideology” of health care would no longer be controversial (although the market value of hospital holding and maybe pharmaceuticals would be).

Inequality, when excessive, makes a society unstable.  We used to talk about total non-discrimination, equality of opportunity, and personal responsibility.  Those ideas looked promising in the late 90s.

We’ve seen the resentment of people in underclasses (on both the right and left, and both theological and secular) become more personal precisely because they now feel looked down on, shunned.  Sandel’s ("The Tyranny of Merit") both talked about conditional equality and personal humility at the end;  I have talked about an idea that I would call “proportionate equity”, although Sandel would think it is still too preoccupied with just deserts.  Maybe some would call it just “social equity”.

As Sandel pointed out early, such attitudes drive non-performers back into tribalism, welcoming of authoritarianism and cultist beliefs and anti-science. It also drives them into ordinary crime, or in extreme cases, terrorism.

But it is a big deal when people use inherited assets (which they did not earn) to develop the capacity to influence policy without having proportionate responsibility for others (or “skin in the game”).  The progressive Left really could make a point about going after unearned wealth (although state laws on trusts won’t change easily) or even look more into expectations of community engagement at a personal level as a part of a person’s individualized “social credit”.  This could really change things if pursued. But instead the progressive Left is caught in the rhetorical convenience of “critical theory” (or applied as “critical race theory”) as well as intersectionality, simply a Marxist reduction into oppressors v. oppressed.

Now, with the pandemic: it may have not have been as easy to prevent the carnage in the US with a total national lockdown early as the Left clams (not even China did that).  But we do have a system where the people with money can protect themselves (and work from home) and depend on the low-wage labor of those who have to take much more risk, as we see with the explosion of deaths and severe cases with PoC.  That can argue for future lockdowns that are much more severe, and make everyone share the loss of standard of living more equitably (and maybe learn to fix things yourself if others can’t come into your apartment because you’re on quarantine).  This could wind up threatening a lot of initiative for self-expression that we have seen on the Internet – partly because of lack of control of harm (the radicalization) but also because it tends to break up solidarity demanded now by progressives.  The world in a couple years may not be as welcoming to the idea that a teenager on his own can develop one of the world’s leading coronavirus trackers without organizing people first.  Indeed, the “quarantine trap” problem could carry with it the idea that when people (like me) set up their own web worlds, they have to recruit proxies to have their backs because they never know when they could be locked away even from their work (in the more dire circumstances).

There is an aspect to “privilege” that we need to talk about separately, and that is well-roundedness, a topic for a future Wordpress post.