That’s the title of a recent tweet by Andy Ngo, and a slogan on one of the pictures you can click to expand.

The signs explain “dress scary” with black faces and masks in protests (most of all in Portland). Protesters don’t want to be identifiable.  In fact, in one protest in Washington DC, they got restaurant owners to ask patrons not to film them.  But, when you are in a public place, anyone has a right to film you (although not “indecently”).  This would comport with various solidarity efforts to raise bail money for then.

In a few cases, protesters have trespassed onto outdoor diners and harassed those who don’t join them with solidarity, and business owners have allowed it.  This has not happened to me, but I have only had a very few sit-down dining experiences (always outdoors) since the pandemic started. (In DC, by the way, they will take your cell number for contact tracing.) 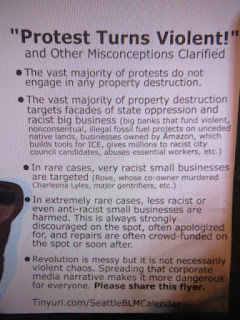 Imagine how humiliating it would be for someone like me to have a “gofundme”.  Oh, I am supposed to ‘get over that’.

Andy Ngo also reports graffiti signs on a building near the police station calling for his assassination (picture in a tweet).  It is not stated how long they have been there, but they might well have been put up repeatedly for some time.

I had not been aware of this until yesterday.  But a few weeks ago a friend (on the ground in Portland at the time) asked me to delete immediately a tweet that connected him to Andy gratuitously. (I did so, and this is the only time something like this has happened.)  But at the time of that tweet, I was not aware of any such graffiti signs.  (I have not been to Portland or Seattle myself during the pandemic; in fact, I have not flown since October 2019 and canceled a trip to LA in late February out of COVID fears).

Andy Ngo had been controversial before, and got “milkshaked” and injured, I believe in 2019.  Most of his writings appear merely “conservative” to me.  He is a gay person of color who does not comply with intersectional expectations – and explains his family history of expropriation by Communist Vietnam after 1975.

A Sept. 3, 2019 article (Robby Soave) in Reason explains some of the controversy.  Andy Ngo seems to refute identarian self-concept entirely.

I am skeptical of journalists and vloggers attributing all the unrest to “Black Lives Matter”, as the violence may be outside of the movement platform (although when you look at the BLM website, for all its recruiting, it doesn’t really have detailed policy proposals, other than maybe reparations.)  Many popular social media personalities promoted their trademark and black blank rectangle, sometimes even bail funds, only later to be embarrassed at the scale of the unrest.  But a major street in Washington DC will get the name.

I also must caution persons, I do not allow people do demand “quid pro quos” from me, that I must support them actively to be allowed to be online for example, which seems like a danger in the coming environment, especially if Biden wins and is not careful.   The idea would have been unheard of a year ago, until the pandemic started. Corporate America’s willingness to go along with this is shocking.  The mainstream does not understand the extralegal indignation of the extreme Left, on the theory it has nothing to lose.

Wikipedia embed of bank building in Portland, click for attribution.