Facebook suddenly removes account of News2Share journalist as he covers unrest in Louisville KY near the Derby, no real explanation UPDATE: Now Restored!

Sometime late on Saturday afternoon, independent journalist Ford Fischer found that his Facebook account had been suddenly disabled, after he had spent a day in Louisville KY near the Kentucky Derby filming confrontations among various adversarial “militia-like” groups.  The page for his company, News2Share, is still available (as of Sunday morning).

There are many tweets, but this one is typical.

One of the groups, the “Not F—ing Around Coalition” had made some unusually provocative (for my sensibilities, at least) about reacting to weapons being pointed on camera, and then had herded away journalists and photographers, forcing them to jump a fence.  Note the provocative statement from an NFAC person as the embedded video from News2share begins.

It appears, when I read Facebook’s community standards, that it is acceptable for journalists to cover violent statements or even acts that they encounter as long as the journalists did nothing to encourage them.  Here is the standard regarding weapons .

Facebook has also recently updated it terms regarding organizations associated with violence.    These policies would appear to be neutral and apply to the far right and to some apparent elements of “Antifa” likewise.    Both the far right and far left are capable of violence, but the far right is more often associated specifically with guns (but that is not absolutely true, as we saw recently in Portland, and previously in Dayton).  It is unclear, with some of the unrest in Portland, Rochester, Louisville, Seattle, Kenosha how much violence may have come from underground subversive agitators from the far right or even foreign sources.  Kyle Rittenhouse’s affiliations, from a factual viewpoint, are not completely clear.  Yet Facebook has banned anyone from appearing to “defend” him, even from legitimate legal theories, on its platform.

It might be possible that Facebook feared that a violent event was eminent, but in this case a journalist was filming what others do;  there was no one setting up their own event (like Christchurch had been). This thread by another Twitter user is interesting on this point.

NBCNews has a perspective on covering violent demonstrations, by Safia Samee Ali, here.  NBC (I used to work for them!) thoughtfully recounts the Heller v DC argument that the 2nd Amendment protects individual self-defense (and property probably) but not necessarily the "right" to organize your own militia -- property should be protected from violent rioters by law enforcement -- but then if law enforcement loses its public trust with profiled police killings, we're back to a Catch 22.  Maybe that could justify "the militia".  (By the way, I do NOT own a firearm -- it's all theoretical for me in a high rise condo.)

I personally believe it is relevant whether a journalist is making a living from their activity.  An individual who simply wants to speak for self and not join established organizations (out of personal values) may be on weaker grounds when crossing the line on what is posted.

I also want to notice that Ford seems to have an uncanny ability to interview "combatants" at a protest and get them to calm down. He demonstrated this with unprecedented detail at the site of a police shooting (under difficult circumstances) in SE Washington DC earlier last week.   That is in an area I had once refused to drive in to for volunteer food delivery.  I haven't seen many mainstream media journalists do this.

Ford's YouTube monetization (partner program) was removed suddenly June 5, 2019 in the wake of the "Maza-Crowder" matter, it was restored in December 2019. There was also an incident where Ford linked on Facebook discussing his YouTube demonetization and the post was removed and he was automatically prohibited from linking for 60 hours.  I tried the same link on a Facebook post and was not penalized.  The tech platforms are not transparent in how they handle supposed "conservatives" who seem to be discrediting "wokeness", it seems.

I was in Shepherdstown W Va Saturday and made a few videos (embedded here) that now seem ironic.  I was in a “Verizon blind spot” and had not learned any news from Louisville when I made these. I’ll come back to them later. 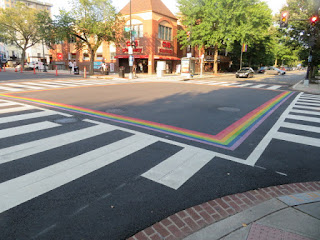 UPDATE: Sunday night 7:45 PM EDT  Ford reports Facebook has resorted his account, tweet, FB link. This all happened why I toured 17th St in DC (it was all peaceful this time, blog post coming).  Ford thinks this post (photo) might have been misinterpreted by AI as "advocacy" (English doesn't have a subjunctive mood like French does to make this "conjectural" meaning clear to a computer so, write posts like this in French or other Romance language;  I guess Spanish would work.)  [You'll have to scroll down the thread to see the "photo"; Twitter URL's inside threads don't load just the URL, but instead the entire thread.]    Further update:  Ford reports an email from FB and his reply.