The social justice warrior demands are bifurcated: wealth inequality involves a lot more than racial or ethnic justice, in a real world 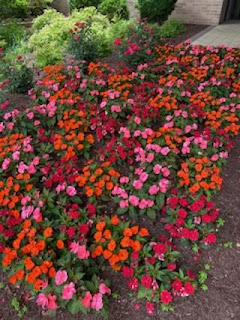 Here are a couple of disturbing stories.  I’ll leave it to the reader to make up mind.

The stepmother of Garrett Rolfe, police officer in Atlanta involved in a back shooting at a Wendy’s recently, has been fired from a mortgage company (Hotair).  Tucker Carlson mentioned it in a recent video for Fox.  The facts are a little bit fuzzy, as the company claims she violated their rules, but frames its statement in an unusual way.

Facebook has taken down a Trump campaign ad for what is purported to be a Nazi triangle symbol (CNN).

I’ll also refer to David Sacks’s piece on Medium “Masks should be the law.”

I want to revisit the question of what others want or expect an individual like “me” to do about it.  I generally don’t circulate in social circles where microagressions or disparate comments are likely to be made (although two or three decades ago I might have).

It seems like there are two intersecting problems (and I am not calling for “intersectionality”).  One is pervasive inequality, which I personally believe has more to do with inherited wealth and environmental advantages than just income inequality. This emphatically covers a lot more than race and even the history of slavery and segregation (and redlining). Some African Americans are indeed well off and have many advantages in their own backgrounds, because enough time has passed for much more opportunity to have developed. So we do have many in politics, public office, and business.  We have had a black president and first lady, which makes this development over the past six years or so very perplexing.

Handling wealth inequality at a personal level involves something like what I used to call “paying your dues” but which is more normally understood as soft “social credit.”  (and expressed by "cancel culture").  It’s possible to imagine a world where privileged people cannot have their own Internet platforms without some community engagement.  I’ve hinted that I think this is coming for a few years now, all the way back to my 2014 DADT III book. Addressing this need could be viewed as part of a person’s public character. An important part of this is stepping up to personal risk-sharing when necessary (“skin in the game”). The aim of a policy like this would not be equity or even equality of opportunity but some sort of "proportional equity" related to what is earned by effort and risk.

There is controversy here about community engagement, because another question would be, how public should you be expected to make it (like in participating in fund raising for others under your own name or brand), in a world that otherwise gives you your own (potentially asymmetric) soapbox? One argument is that without this public confessional from influencers ("bend the knee") politicians have no incentive to change things (in response to normal solidarity and group activism) -- hence we have this problem with the police now.

The second part is rectifying America’s own original sin – slavery, etc.  That arguably isn’t limited to blacks, but would encompass the wrongs done to Native Americans.  That background made it so hard for mainstream media to see what had happened in the Covington Kids case, for example.

Some of the rhetoric suggests white Americans have personal past dues bills owed to African Americans – the reparations issue, made personal.  I’ve covered before David Brooks’s ideas about national service to force the idea of social proximity on everyone.  But there could be an idea that people must specifically show they have benefited black Americans as a group with their activities (like say public fundraising) before they can be heard individually.  That would corrupt all speech.

Yet it is common in history for many issues like this to be viewed through the rubric of fixing group or ethnic wrongs and forcing everyone to go along.  Hence, the “silence is violence” oxymoron.

In the 1990s (as we came out of the worst of the AIDS crisis and as the election of Bill Clinton, following the Persian Gulf War and then the unusual cultural battle over “don’t ask don’t tell” developed) we developed a certain moral bias, that your work life and even public life are separate from the very personal aspects of your life.  Whether you marry and have children is your business.  Whether you feel attracted to people outside of your race is your business.

Modern social media changed all that, and made private life part of public life rather than an afterthought. No wonder we see the idea of “anti-racism” as an expectation in everyone’s public and private behavior.  But we also need to remember that many people have a life experience that is mostly tribal, and involves very little independent self-expression – which some cultures (the Amish, for example) explicitly say destroy community solidarity and throw many less competitive persons (who are more likely to be black or native for historical reasons) back in line.

Social media companies and possibly even hosts could become hypersensitive to demands from activists that people perceived as "privileged" (by lack of evidence of social credit) not be allowed to remain on stage.  We've seen evidence of this since especially late 2018 (and even after Charlottesville in 2017) with erratic and unpredictable changes in policy (especially by YouTube suddenly in June 2019).  The enormous disparity of sacrifice (by race) caused by COVID-19 would only add to the popular pressure that they may feel.

The video above would imply a wealth transfer of about $7000 per white person to black persons, if done literally. Do the math. 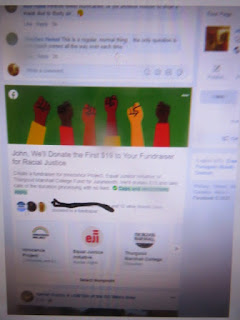 Also, later tonight I found this gratuitous invitation in my Facebook feed. No, I don't run fundraisers under my own name for specific ("identarian") groups of people. FB, given its monopolistic behavior, seems to be using the political pressure from BLM to offer a quid pro quo to users and hint at "compelling" in joining their political cause publicly,