Demonstrators are very determined to get group justice this time (BLM) 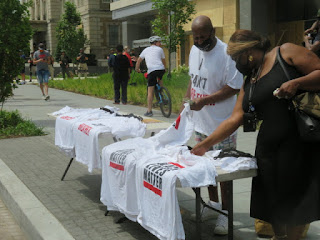 OK, here we go, into a morass.

The New York Times is apologizing for a stern op-ed from Senator Tom Cotton (link) on June 3, and the Washington Post is jumping on it (Paul Fahri et al)

There are two sets of problems here.  First, there had already been a lot of loose talk about (Greg Carr) “martial law” (maybe even an Internet shutdown) after the violent riots broke out last weekend.  Since maybe Tuesday, they seem to have calmed down, and it looks like the million or so marching in Washington Saturday will be peaceful (as if we could have had Gay Pride this June after all, as far as health is concerned – as long as everything stayed outdoors – and that may be correct medically).

Wednesday, at age 76, I broke the “safer at home” idea and visited the protests on 16th Street and made some video (as it happens, my best friends in indie media were just getting up from having been up all night covering the crowds the night before, so essentially I felt like I was filling in).

Driving back (I eschewed the Metro) stores were boarded up from 16th St all the way past the GWU campus onto M St, all the way to Key Bridge.  They had even gone into stealth, removing their trademarks outside. Once I got into Arlington (Rosslyn) the damage stopped, although I’ve seen isolated protesters in northern Virginia.

To say that operators of businesses must be brought low and start over in life (that’s already happened anyway because of coronavirus shutdowns), as a kind of punitive reparation of past institutional racism, is vengeful thinking from the far Left, it’s Marxist, even Maoist.  I don’t have a physical presence, but there are definitely lines of action where this way of thinking can threaten me.  That’s essentially terrorism, a variation of what we were seeing a few years ago from radical Islam, which we seem to have forgotten.

At the present time, it’s not clear who the outside insurgents are, and how there are so many, and how they are getting into the cities.  Recent news articles have discredited claims that they are Antifa.  There does seem to be credible evidence that white supremacists have posed as radical Leftists to promote false flag violence. So right now, the actual evidence (Tim Pool’s videos notwithstanding) suggests that covert white supremacy might actually being a bigger driver of the unrest than I would have thought possible.  However, there are some individual arrests of people known to be associated with left-wing anarchism, too.  (Wikipedia has more information on the external violence, as does Joan Coaston, explaining "boogaloo" on Vox.)

So once the looting starts, yes, I favor using force very quickly.

Nevertheless, there is enormous tenacity among the legitimate protesters, steadfast through last night’s thunderstorms.  I wonder how one million people will get here Saturday and even where they will stay.

There are two problems worthy of protest.  One is the economic inequality and unequal risk-taking (skin in the game) resulting from the lockdowns.  The stock market still seems to go up (maybe now on vaccine rumors) even as destruction downtown happens.  Maybe there is rationalization: the retail stuff stolen couldn’t be sold right now anyway.

The inequality is not limited to blacks, but still disproportionately impacts them, as does the medical risk of some jobs and the overall health status leading to much higher death rates in blacks, some Latinos, and some indigenous peoples.  But the financial hardship impacts workers of all backgrounds.

The second problem is, of course, the claims, after decades (and a black president) that police target blacks arbitrarily and this is especially dangerous for black parents.  I have to admit, I heard that once in the mid 1990s from coworkers (and there would be a lawsuit where I worked that I won’t get into now). This is what seems to override the usual economic unfairness arguments (which do affect all groups) and cause demand of attention, even from general interest bloggers (like me) to this specific outrage. Lack of dedicated attention even from someone like me is seen by some as a back door invitation for violence by police (or supremacists) to continue.  But this fits into the arguments about radicalization on social media we have been hearing since Charlottesville.

I do not form emotional attachments to people in a group as readily as others, but I am seeing that the increase of inequality has made people much more vulnerable to manipulation by others through their own participation in tribal groups, which is something I observe but don’t experience much myself. I do not engage in influencing efforts to get justice only according to group identity.

The media does report that the markets were surprised by the drop in unemployment with some partial reopenings, but blacks did not benefit from reopening nearly as much as whites.

This video by Martin Goldberg is also interesting.