Twitter corrects Trump with fact checking on vote-by-mail; Facebook has fact-checked me just once so far; Trump threatens to shut down social media for humiliating him 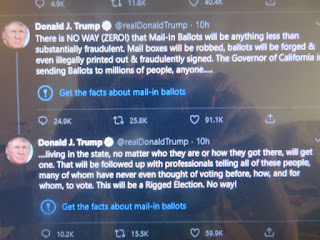 Twitter, for the first time ever, has intercepted one of President Trump’s tweets with fact checking.

Having worked a primary March 3 where there were machines that collected physical ballots, I can say there are very elaborate procedures for handling all the components of the election process, balancing totals and storing reports and disks in a very precise way manually.

Facebook recently intercepted one of my posts where I simply referred to a Vice story about the Senate, FISA and surveillance.  That is the first time that has ever happened. Facebook provided an official act-checker from Gannett’s USA Today. 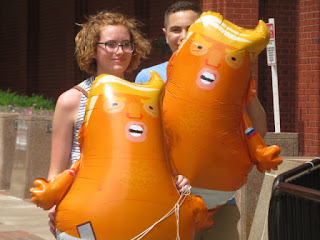 Update: May 27.  This development has had repercussions. Trump made a verbal threat to shut down social media after Twitter fact-checked him in public, as in this story by Zeke Miller.  Trump claimed, Tech Giants can't silence conservative voices.  "We will strongly regulate them or close them down before we allow this to happen".  The article says this cannot happen without Congress.  But an Atlantic article that I had covered on Jan 5, 2019 in my Book blog suggests that he can with a national emergency. A "second wave" could be harder on tech companies (politically). Biden, also, has said he wants to end Section 230. Pay attention to all this, please.  Later Wednesday evening, Politico reported that Trump would issue the Executive Order Thursday (tentative draft). The final order is quite a bit changed for legal reasons (WH copy) and was signed around 4 PM Thursday. More details will appear soon on my Word Press sites.  Check Books blog for a coordinated post May 29.