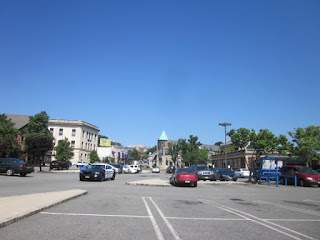 There is some controversy of a small businessowner who was forced to close her gift shop in Bernardsville NJ recently, by police, after a confusing set of details.  She had gone past curfew. Or her business was deemed inessential. What had been happening was that she allowed customers to come into her shop to pick up items ordered online. Apparently it would have been OK had this been curbside.

But some accounts claim she was going to be forced to stop selling online, too, since she isn’t essential. (Using web bandwidth others need more?).  The facts don’t seem to be there, if you read these stories:  News12,  Patch, Tapinto.     But this all sounds so pre-Marxist.

Theoretically, that neo-Marxism could mean I could be forced to shut down offering books, if I weren’t “essential” enough to even be online, like I should join a war effort (“we’re all in this together,” right).  But no one can come into my condo building as a “customer” (they can as a personal friend) to buy merchandise anyway, according to ByLaws which are common for almost any condo building in any state.  That has nothing to do with Covid.  They can order from Amazon or BN, etc (link on these sites). Of course, a small retailer can mail items manually, but that is less than desirable with Covid around when there is no economy of scale in the retail operations themselves.  You got it, this is not a good time for small business to justify its own bottom line, for all kinds of reasons.  It’s not going to be easy for the entire economy to recover from this even when there is a vaccine or treatments. ( By the way, it’s easier a lot of time for sight-impaired people to use the big corporate sites to order merchandise;  ADA compliance can be tricky for small retailers (but we’ll come back to that again, that’s an issue not completely settled as to how it should be addressed technically)).

Facebook notified me it fact-checked a Vice story I had reshared, with USAToday’s fact checking service. USA Today’s article is “Fact check: Did Senators Vote to Allow Access to Internet History Without Warrant?  Not exactly.”  The earlier story on Vice had gone viral May 14.  A final vote did fail, but there is a lot of technical stuff about FISA and when searches are actually permissible constitutionally in the article.  Details for another day.