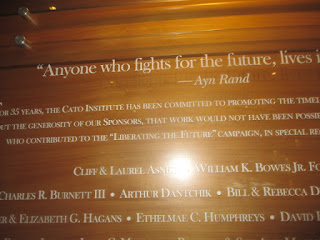 Today. Friday, February 3, 2017, the Cato Institute in Washington DC held a forum “Will President Trump Threaten Free Speech?”  There is a link (and full video) here.  A similar event (attended by Mr. Rose) had been held Dec. 6, 2016. But this forum followed the inauguration ("America first").

The discussion was led by John Samples;  participating were Flemming Rose (“The Tyranny of Silence”, Feb, 3, 2015: , Robert Corn-Revere and Francis H. Buckley.

One early point was that Trump’s “threat” to expand libel laws was overblown. These are controlled by states. Canada already has libel laws following the British model (the defense has to prove truth) but newspapers in Toronto are doing well, and Canada seems like a freer society than ours to many people.  (Canada keeps on turning out outstanding talent in the movie industry.)  Canada also has better procedural law which makes it less likely plaintiffs can file frivolous SLAPP suits to harass speakers.

Another point was a comment by moderator Mr. Samples that the idea of “more speech” (so often touted by libertarians like John Stossel) isn’t always working now  Because social media like Facebook can aggregate news stories according to user “Likenomics”, people tend to stay in their own political and cultural bubbles and not become aware of other points of view.  That is one reason why Hillary Clinton lost unexpectedly in several “Blue Wall” states.

Another point was that anonymity of speech, so widely defended by Electronic Frontier Foundation, is often misused by “trolls”.

There was a question from the audience about inciting violence.  The panel was emphatic that speakers like Milo Yiannopoulos do not incite violence merely by their social roles as "provocateurs".  Someone mentioned past violet protests at American University.  There was concern about President Trump’s threat to withdraw funds from Berkeley.

But another audience member reinforce the question by mentioning trolling on social media, especially Twitter, and the encouragement of harassment.  The speaker may have been thinking about Milo’s feud with Leslie Jones (“Ghostbusters”) that got him banned from Twitter.


The panel was critical of campus speech codes and safe zones, and maintained that “there is no right not to be offended.”

I asked about the likelihood of challenges to Section 230.  The reply said that it had not been yet mentioned by the Trump administration.  The panelist felt that even given the provocations of incidents like Backpage, the Courts would defend service providers with the First Amendment.   That notion may be supported by previous rulings (like with COPA).  But the right to “publish” (in a narrow legal sense) information to one person who understands it (making defamation possible) does not necessarily extend to create a right to self-broadcast without gatekeepers.

Since this was on Cspan and carried by live video, probably someone in the White House watched it.  Maybe I spilled the beans.  A question here is like an indirect question to Sean Spicer.  You just don’t need White House press access of to go through Secret Service security.