Trump's reported dislike on people's dependence on computers (instead of each other?) 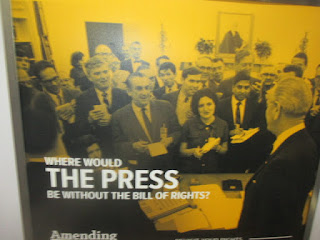 A worrisome report for New Year’s Day is that President-elect Trump doesn’t like computers.  CNN has a typical story here.

He said they speed things up, but expose us to a lot of danger he can’t control.  He suggested that secure messages be sent be courier.  That may not be so radical:  we still have certified mail and even registered mail with the USPS, and you can’t serve somebody a subpoena (that is, sue somebody or even request a cease-and-desist) or summons by email or smart phone – you have to do it physically – at least by mail, or by hand delivered letter or process server.

I’ve even been skeptical of email advertising and building up email fan lists (something encouraged by “Blogtyrant), partly because of all the malware.  I feel much safer with texts or social media messages (even by Twitter of Facebook).  In fact, on Twitter I prefer to communicate sometimes by private message than a public tweet (although the evidence stays – I don’t like the idea of Snapchat).

I’m use Paypal rarely, as I am used to credit cards, debit cards, and electronic check.  But a few sites (mainly non-profits) insist on stakeholders using Paypal, because it is somehow better for unbanked people, as if to make a political statement of sympathy.

Trump had been reported during the campaign in October as having said he thought people were over-dependent on computers and electronics.  Melania Trump said she wanted to start a new campaign against cyberbullying.

Slate has reported that Trump knows almost nothing about computers, used to having secretaries do his correspondence.  He does tweet by smartphone, but staff does everything else. l   Gizmodo asks if Trump has “ever” used a computer.

Aversion to computer dependence comports with “doomsday prepper” mentality, which I don’t think Trump shares.  But Trump seems to believe people should get their information from chains of social authority than on their own by electronic investigations.  Trump seems to believe in “relational” morality more than pure individualism.

Would this lead to some sort of crackdown on user generated content?  I wonder.

CNN was reporting New Year's Day on Trump's claim to have private information on the Russian hacks (or the election? of the Vermont utility?) that the press doesn't have, and would reveal it Tuesday or Wednesday.  Trump seems to believe that you can't accuse a country of hacking until you could "prove it in court".  (So your need a real-life process server first?)

The Verge (a Vox site), in a paper by Vlad Saviv, gave a discouraging report on the pretentious meeting that Trump had with Silicon Valley executives.

One sentence caught my eye;  even without net neutrality, why would a telecom provider block Google services?  They didn’t before.