Cato holds forum on "Free Speech in the Age of Trump" 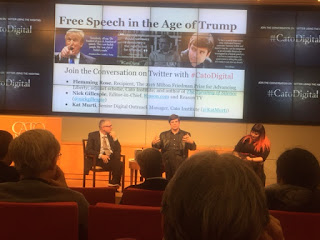 Tonight, the Cato Institute held a forum at 6 PM regarding Digital Rights under a Trump Administration, or “Free Speech in the Age of Trump”, link here. 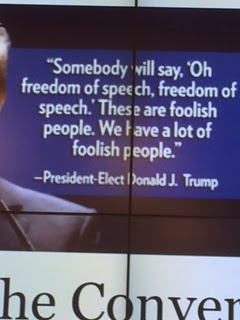 One of the two main speakers was Flemming Rose, author of the “The Tyranny of Silence” (book reviews, Feb. 3, 2015).  Rose was the editor of Jyllands Posten in September 2005 when he decided to publish the cartoons of Muhammad.  That led to a huge uproar and eventual threats against Rose, as explained in the wiki article  or Atlantic.  There was a time later when as a condition of employment he was not allowed to speak or write publicly about religion or the controversy.

Rose insists that the only right you don’t have in a democracy is the purported right not to be offended. 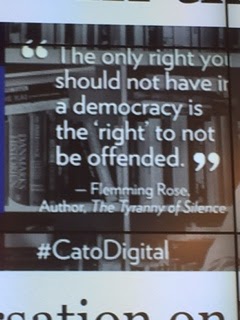 Nick Gillespie, of Reason Magazine, told a story  of a subpoena his magazine got after a comment to an article was taken to threaten a federal judge, who had sentenced Silk Road founder Ross Ulbricht to life imprisonment.   Section 230 should have protected Reason for liability for the comment.

Later, as the video shows, I asked whether could use the idea of “war against civilians” by ISIS as justification for shutting down a lot of user generated content.

Gillespie also mentioned that partisanship and gerrymandering, along with weak parties, make those favoring  moderate positions (fiscal conservative, socially liberal) impossible to elect, and tend to lead to various forms of identity and victimization politics.  He spoke badly of Bernie Sanders. 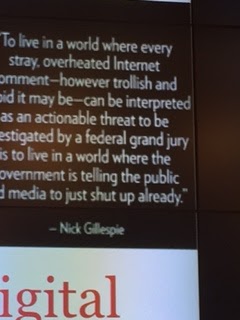 Gillespie noted that Facebook is a "platform", Breitbart is an "opinion" site and should not be regarded as a news site, whereas the New York Times is a true news site.   "Citizen journalists" do report news when they photograph videos themselves as they see it;  but by and large most "citizen" commentary is opinion (based on personal values or philosophy) and not true news. But readers have trouble understanding that.

After the session, I did mention to him that I had intended to include Section 230 in my question.  It’s easy to see how Section 230 could come under fire after “PizzaGate” since the many claims on certain forum sites were libelous and it would be very difficult in practice (for the restaurant) to go after everyone who had posted fake news.