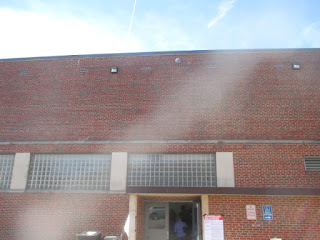 After the cleaning crew (which showed up before breakfast as I got up) left, I went right out and voted in Arlington, VA.  The line was moderate, but it took only about fifteen minutes, voting at 10 AM.

As I’ve covered before, I worked as an Election Judge (an 18 hour day) three times, the most recent being in 2007.

Now, the election workstation PC’s with Windows XP are gone, and we’re back to paper ballots with blue (pun) ink, marking “x”’s.  But the validation of voter registration is online, reading the strip on your driver’s license.

I saw no police cars (I had expected to see at least one).  I had no trouble parking,

I took no chances.  I would normally vote Libertarian (the Aleppo gaffe is a problem).  I voted for Hillary.  What if Virginia is close (less than 100 votes) and then the electoral college is close?

I even looked at the ballot two or three times before feeding it to the machine.

There is a scenario where neither candidate gets 270, and the election goes into the House on Jan. 3.

If LDS member Evan McMullin won Utah, the House could choose him as president.  McMullin is said to be fairly light on the social issues and traditionally conservative on foreign policy and economics, which is what a lot of people want.

As for Trump, yes, his behavior disqualifies him.  He did articulate some necessary ideas about national security and corruption.  His oldest son (who is 38) has the same knowledge base and none of dad’s narcissism, and actually could be safer for the country as president!    I can imagine journalists who could make good “moderate” presidents (Anderson Cooper, or Vox’s technology guru Tim Lee, who is just 36).  They certainly know enough to do the job.   Given Reagan’s example, could entertainers?  Election Day is Reid Ewing’s 28th birthday – seven years shy of the requirement –  Reid lives and goes to college in Utah. .  Besides having one of the most artistically fascinating Twitter feeds ever – his parents both sound like good fits – Dad is a college professor.  There are plenty of people who “know enough” in business who would work – Mark Cuban, Tim Cook.  Jimmy Fallon wants to be “vice-president”.

But you see where I am headed – we don’t attract the right people to run for office anymore.

One of the best articles on what is likely to happen tonight is here.

Journalism as a profession or avocation is in trepidation over the idea of a Trump for president. I posted an article on Trump’s potential threat to citizen journalism yesterday on Wordpress. And note Tim Lee’s article on how Facebook is undermining public confidence in journalism, an article with a buff picture of Mark Zuckerberg,
Posted by Bill Boushka at 9:41 AM