What is involved in assisting refugees and asylum seekers: overview of what I have found out so far 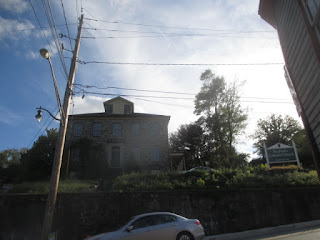 I wanted to share a few thoughts today on the whole subject of sponsorship of other people:  that is, possibly housing or hosting an asylum seeker (LGBTQ or not) or of participating in an assistance group for a refugee family, probably from Africa or an Islamic country.  I also wanted to mention “sponsorship” appeals by charities that happen on Facebook.

I’ve discussed the difference between “asylum seeker” and “refugee” on other blog postings.

In the United States, refugees are admitted after considerable screening by the US government (Homeland Security and the State Department), and are assisted by volunteer groups associated with non-profits or churches or faith groups (mosques or synagogues), supervised by large social service agencies approved by the government.  Typically it takes about twenty of so volunteers to assist a refugee family and most are settled in commercially run apartments or townhomes.  Benefits are paid to refugees for a limited time.  Besides commercial apartments, refugees generally are settled in private homes only of relatives or others who knew the person overseas.

In Canada, private agencies have much more responsibility. Private sponsorship groups are smaller.  Placement in private homes (especially of single individuals) seems more likely.  Libertarian organizations like Cato and Niskanen have been advocating that the U.S. allow a private sponsorship model.  It is relevant that in Canada health care expenses for refugees would be covered by the Canadian single payer system, which the U.S. does not have.

Asylum seekers, by contrast, are here legally only because of submitting an asylum request.  There is a variety of circumstances that have happened, including visa expiration, or illegal entry into the country.  For at least six months (maybe longer) or until asylum is approved, asylum seekers are not allowed to work or earn their own living.  Generally, the INS is likely to hold an asylum seeker in detention unless a private agency or individual or family agrees to support him or her.  This could actually be better for the seeker if he or she has health care issues.  The reasoning behind this approach is to prevent frivolous asylum claims after illegal entry; someone will get “freedom” only if private persons or groups are willing to vouch for them and take responsibility for them (with analogy to the Canadian model for refugees). Usually INS would expect those persons to include US relatives or others who know the asylee well.

In some larger metropolitan areas, non-profit groups try to assist asylum seekers, and in some cases ask for people to volunteer to house them.  In a few cities, group homes have been set up.  The INS always prefers to see relatives or people who actually know the person house him or her, if possible, but obviously this isn’t always possible.   In some cities, smaller non-profits are able to assist hosts who live in a relatively small or compact urban area with access to good public transportation (and with other infrastructure, like Internet access).  This seems to work out OK in practice.

However, it appears that someone who lives farther away from convenient assistance could find hosting very challenging.  To the best of my knowledge, it appears that the INS would require the host to provide an I-864 (an Affidavit of Support Under Section 213A) and accept full responsibility for support of the person as a dependent.  I don’t know how the tax code would work, but this obviously sounds risky (for example, health care expenses).  It sounds more analogous to foster care of an adult.  A development like this even brings up the idea (were I to participate as a host) that I might need a "real job" of sorts, actually selling things to other people rather than offering my "free" journalis,.

Generally, someone who is very consistently active in one or two, or a narrow range of groups (including faith-based) is more likely to be able to assist an asylum seeker directly than someone who remains “independent” and floats among a lot of different places, as I do.  Indeed, I have my reasons for my peripatetic behavior, but they could interfere with being of real assistance with this need.

Even so, I may be looking into this much further soon.

I also wanted to mention the appeals for “sponsorship” of overseas (mostly Africa) kids, which I sometimes find in my message box on Facebook.  Save the Children did this back in the 1970s (I don’t know if it does now), and you would get mail from the child, but then sponsored children would be changed.  I am fine with a reputable charity’s deciding whom to help, but I don’t like the idea of being connected to a specific child unless I really was prepared to spend a lot of time and follow through, perhaps be able to make overseas visits or consider adoption. Otherwise it doesn’t sound real.

There are other models for becoming directly involved with people overseas, like micro lending through Kiva.   Again, you have to be prepared to spend a lot of time and effort on narrow pragmatic interests overseas.  I do think there is said to be something for the “Give Direct” model that Vox likes  But in the end, the biggest need overseas I think is for real infrastructure.

Having a dependent means having your own skin the game, and accepting a certain place or “right size” that can depend on the success of others who need you.  It’s a heavy topic.  But it may confer “the privilege of being listened to.”

However Nolo writes that an I864 normally applies to family relationships and immigration, not to asylum status or refugee status specifically, as here. http://www.nolo.com/legal-encyclopedia/i-m-asylee-applying-green-card-do-i-need-financial-sponsor.html Also this http://www.nolo.com/legal-encyclopedia/free-books/fiance-marriage-visa-book/chapter14-15.html Still, many sources say that immigrants who have applied for asylum but not had it approved, need to show someone or some group will support them before they can leave detention.