A new Facebook profile picture, and "Ephram's inability to change" 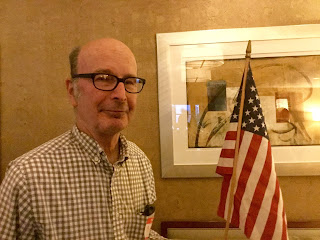 I got pestered repeatedly by Facebook to update my profile picture, and so finally I did, with a photo taken on me at an AGLA social on July 1, and got four likes for the new profile.

The old profile has a picture of me at a candlelight service.

Some other remarks:  I understand that some people see organizing others as their mission, their form of activism.  It may be circumscribed by what they do at work, that is also publicly visible.  I generally don’t announce all my activities in advance (security is one reason). I generally don’t go to the same event repeatedly unless something new would happen at a particular occasion (like a meal, or being held in a new venue).

I can remember that in the WB show “Everwood”, starting back in 2002 and running a few years, the piano prodify Ephram (Gregory Smith) wrote an essay that was published for a while on WB’s site for the show, “Ephram’s Fatal Flaw.”  Ephram said that his fatal flaw was his inability to “change”.

So it is with me.  I feel much more pressure to become connected socially, maybe in volunteer activities, to others, in situations where I might have been unwelcome in the past.  I did the kind of work for a living that is often best done individually, and that was very demanding of detail and attention, sometimes putting personal relationships (dating and marriage) on a backburner as a lower priority.  Not everyone would tolerate this.   And I don’t like to be the one to make someone else “all right” if that someone isn’t so, but this remark takes me into a troubling area that will be explored another time. 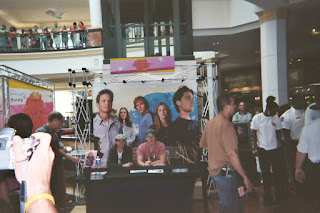 Section picture  Event with Gregory Smith and Chris Pratt at King of Prussia Mall, PA, August 2005.
Posted by Bill Boushka at 10:10 AM