Community service as a graduation requirement; maybe this does build some social resilience 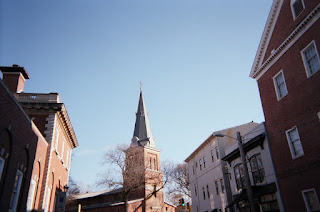 The Metro page of the Washington Post confronts us Monday morning with a story by Domma St. George, “A surge in hours of service to graduate”, online more blunt “Who needs the beach? Spring break means community service for some”

Making a community service requirement for high school graduation has been controversial, but it happens in Maryland, a blue state with a very moderate Republican governor, Larry Hogan, who has learned some personal humility with his own bout with cancer. Maryland has also produced one of America’s most talented teens, Jack Andraka, now at Stanford.  Ten years from now, Larry Hogan may be Jack’s patient. Yup, that requires medical school, stepping out of the spotlight for a while, and a unifocal purpose – and actual service.  (Jack related on Twitter recently that he had learned “the hard way” what it’s like to be a patient for a few days. It can even feel humiliating.)

Is forced service a kind of “conscription” or taking turns at forced servitude, in the style of Mao’s Cultural Revolution? I think it certainly is a step toward equality, in a personalized way.  If others know that “everyone serves”, then some others may have more reason to believe in the system.  This has major security implications.

Above, in Washington state, in 2013, a high school teacher (Steve Bergquist) and state representative gives his own personal account with the idea of service as a graduation requirement.

But service, just when it fits your schedule and doesn’t demand or cost anything, probably doesn’t accomplish much.  Not all service events need the quantity of volunteers they try to recruit (and that goes for the monthly Community Assistance at Mt. Olivet Methodist Church in Arlingotn VA).  I caught a glimpse yesterday at the community garden, where volunteered were dedicated to low-tech, labor intensive service growing organic food.  There is a socialization, of sometimes letting the group be more important than the self, and of simply belonging.

The same sort of thing happened at the pot luck Sunday at the First Baptist Church of the City of Washington DC.  The new pastor asked for everyone to sit at a table with some people they don’t know.  We used nametags, and have never done that before.  We were asked to go around the table and give out specifics about ourselves.  I didn’t get to play Pharisee (“do ask, do tell”) because the experience was stopped for a children’s presentation on a charity (World Ark amd Heifer International) providing farm animals to poor populations in Africa.  I've given enough speeches, so the interruption was welcome.  And, true, I'm not fair game to be manipulated into gratuitous social introductions "just for their own sake".

I detect a bit of Amish culture in all of this.  Community service is not necessarily supposed to be “efficient” or totally redemptive of personal rights.  And the idea of expecting it can certainly be abused by religions leaders and politicians.  It can be mixed with unwelcome proselytizing, and in at least rare cases it involves personal risk (as the LDS church about both). It can require interacting with people in ways that are sometimes more “intimate” than usually expected or anticipated or even viewed as normally appropriate with “strangers”.  It may mean accepting people into one’s own life with less expectation of ambition level than when just left to one’s own devices (the old “upward affiliation” problem.)  Most of all, it sometimes means accepting Rick Warren’s idea “it isn’t always about you” but about a larger community.  Otherwise, “you” are simply too vulnerable to things you can’t control, which might include “irrational” hostility from “strangers”.  This idea becomes a moral issue because it demands and builds resilience, which is essential to a community’s surviving big time challenges, even from enemies.