Could ordinary bloggers get into trouble under SOPA over mere links? Not likely, but "just maybe". Welcome to Chilling Effects. Will controversy get "frozen out"? 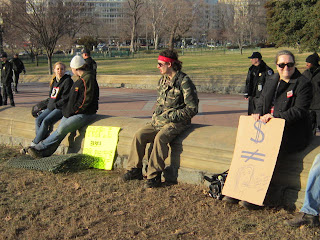 As Reddit is back on line and the “Blackout Day” comes to a close, I wanted to look at some of Reddit’s claims (link on yesterday’s post).
Reddit’s main concern seems to be the part of SOPA that requires sites to scrub links to any legally blacklisted foreign site. It acknowledges (in the “No Duty to Monitor” provision) that compliance requirement doesn’t start until notification, but that search engines actually could be required to avoid listing any foreign sites that it could reasonably suspect of future infringement.
There is some controversy over what constitutes a search engine.  Any dynamic site that accepts user input could apparently qualify, including Wikipedia (according to Jimmy Wales’s own statements) and “live blogs” as well as Reddit itself.  The definition is much broader than just the conventional concept illustrated by Google, Bing, and Yahoo!.  In theory, my “doaskdotell.com” might fall under this definition, because it has a Pico Search box accepting user search arguments of varying formats, and purports (in somewhat the same spirit as Wikipedia) to be a structured knowledge base about “political debate”.
In theory, this all could mean almost any substantial knowledge site or blog (or interrelated group of blogs like mine) could be required to somehow access as list of prohibited sites before offering a link.
Do I believe this would really happen?  No, but the very possibility creates a chilling effect for Internet investors (including people who might work with ME in the future.  Remember, also, there is a clause about "technical feasibility", and this whole discussion about hyper-links is in the "after the offense" part, not the part that gets a site labeled as "dedicated to infringement" based on a possible minority original violations. (Remember, on that, Lamar Smith had said that sites like Facebook and YouTube couldn't possibly be considered infringing, but he gives no real legal reasoning that matches the language of the bill as it follows.)
I’m impressed that Reddit (and Wikipedia) believe that the big money lobbyists from legacy media are trying to get Congress to draft the “little guys” who want to be in the media to play their game as foot soldiers protecting them from foreign competition.  (Wikipedia, in fact, has a rather explicit statement on its blackout page to that effect.)  Since US law cannot go after “foreign” sites as readily (the way ICE or Immigrations and Customs Enforcement may in the US, seizing physical assets so that it is impossible for a suspect criminal enterprise to keep its web presence up), it’s trying to prohibit ordinary Americans (individuals and small companies) from doing business with them, as if this were the moral equivalent of war. Again, as Patry said, it seems to be expanding its role of gatekeeper and ability to demand sacrifice and tribute.
“Piracy”, it seems, becomes the excuse to go after all foreign competition, in a strategy that seems to put ordinary Americans against the low wage workers of other countries, especially Russia and China. That’s how a far-Left interpretation of SOPA could go.  Ironically, it reinforces Donald Trump’s claim, “The Chinese are not our friends.”
The logical way to go after real piracy threats from overseas (and they are real) would be for the State Department to do its job – to work with overseas governments and step up enforcement against the “actual criminals” rather than impose partially prospective downstream liability on Americans who may do business with them. It sounds like the thinking behind “Know your customer” or “Know your shipper” – again, a quasi-war concept.  All the sudden, the individual with a blog is the moral equivalent of a company with a lot to gain – but is that what the blogger signed up for?
Scientific American printed a brief missive (by Larry Greenemeier) “SOAP Opera: White House shuts down anti-piracy bill”, rather dismissive, with a quip about “free content” which some found offensive today, link.      Look at the comments.  The first comment warns “Commercial websites that would lose real money anytime they are falsely accused of hosting copyrighted information will freeze out any users with marginally contentious or controversial contentCommercial websites that would lose real money anytime they are falsely accused of hosting copyrighted information will freeze out any users with marginally contentious or controversial contentCommercial sites that lose money any time they are falsely accused of hosting copyrighted information will freeze out any users with marginally contentious or controversial content”.  But later another commenter warns “I can’t believe the liberties that some people think they alone are falsely entitled to.”  Does he mean the media companies or ordinary people?
Posted by Bill Boushka at 6:54 PM