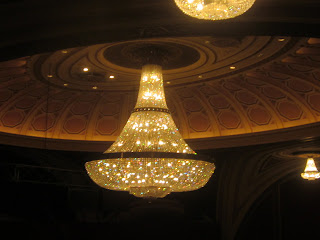 The expected mark-up of SOPA did not happen today in the House Judiciary committee because of the distraction of a snarky tweet. Here’s the CBS story by Declan McCullagh . (Here’s the link to the tweet ). In the end, there weren’t any amendments offered t narrow the language either, so the tweet might have distracted progress in making a bill like this (which Google says it actually wants) workable and not a threat to “average bloggers” on the web.

In any case, there’s no encouraging evidence yet that the House Judiciary Committee is interested in the moderate alternative, the so called “Open Act” yet.

Declan McCullagh had an FAQ Nov. 21 which highlighted the difference between SOPA and Protect-IP: the older Senate PIP version (whatever its “great expectations”) doesn’t deal with companies that actually provide connectivity. Here was his page (“How SOPA would affect you?).

Today, at the West End Theater in Washington DC, I picked up what looked like a promotional copy of “Documentary.org” winter issue (was I supposed to pay for it? – I didn’t see a price on it until I got home). On page 12, there is an article by Cynthia Close, “Creators vs. Consumers: Reclaiming the Conversation about Copyright”. It’s a review of the book by Patricia Auferheide and Peter Jaszi, “Reclaiming Fair Use: How to Put Balance Back in Copyright”. (See my Book Reviews blog, Aug. 25, 2011; just follow the links on Blogger Profile.) Close is executive director of Documentary Educational Resources and her review doesn’t seem to be available online yet, so I have to base these comments from the print version. (That’s OK.) She characterizes herself as a “gatekeeper” responsible for the ability of her clients to monetize their work. So she says, “I confess some ambivalence at giving Fair Use a platform in this review” and says later “I am loath to promote the idea that it is okay ‘to use copyrighted material without permission or payment. ‘ Indeed, it’s not; you can’t simply apply Fair Use every time you want to use a clip. You need an attorney to scrutinize the usage and advise you yes and no" (emphasis mine).

A little context is in order here. It’s true that commercially released films are fastidious in giving credits and getting licenses for even the most incidental clips from other films (as you see in rolling credits at the ends of movies) and for any music. It might be Fair Use not to do so sometimes, but commercial distributors probably won’t buy films that don’t honor this expectation and major festivals probably won’t air them. (I have seen films that violated this rule in smaller festivals.) Books are a different matter. There are companies that secure permissions for authors, but really my experience is that it is OK to do brief quotes without permission. Blogs – we’ve seen this fought out with Righthaven. But generally the courts are coming around to the idea that even full (if relatively short) news articles may often be reproduced in informal blogs and forums under Fair Use.


It’s true that indie filmmakers with investor money are normally expected to purchase script clearances and rights through the usual industry machinations. But if bloggers or YouTube video producers had to do this, it would shut down UGC (“user generated content”) on the Web as we’ve gotten to know if in the past 15 years. And imagine what would happen if service providers were held responsible for making sure that web publishers did so.

Even more potentially sinister is suggesting that filmmakers or content generators have to pay their tribute to lawyers first. If this were common practice for the Web as a whole, again, UGC would disappear. So what we have here could grow to an attack on amateurism.

Close finally concludes “While the promulgation of the concept of Fair Use over the past several years has helped made the production of, say, history and essay documentaries much more cost-effective, it’s a two-way street. The gatekeepers lose potential licensing revenue—and so, eventually, do filmmakers.”

There’s something disingenuous here: if something is legal (that is, application of Fair Use), should we be end-rounding it so that established interests retain control of what makes revenue – and in the future of what gets published or gets filmed? Shutting out Fair Use would be shutting out low-cost competition.

In fairness to Documentary.org (and with a bit of irony), I note that the group has been fighting for a loosening of the DMCA provisions to allow documentary filmmakers more leeway in “ripping” DVD’s (now BluRay) and other media for getting clips upon which they can make critical comments in their documentary films (in a manner similar to how bloggers comment on news quotes – an issue even in the Righthaven cases). Here is a typical link on their efforts.
Posted by Bill Boushka at 8:01 PM