Movie piracy in the physical world: see something, don't say anything 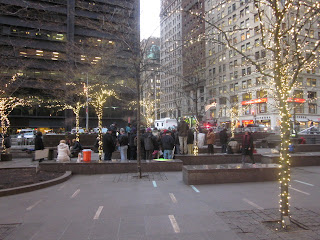 I watched a sale of pirated movies on a subway today (the A train, northbound, in NYC, north of West 4th St station), stumbling onto the witness of it by happenstance.  A man had a bag of them, and took them out and showed samples from them to a low-income woman on a small laptop. She actually bought a few of them for about $3 a piece.  I happened to have a seat right next to the activity.

The movies were all big budget Hollywood items (like "Happy Feet 2"); none were the indie films that require an "intellect".

What if I were one of the artists "pirated"?  In my situation, if a low-income person sees my stuff for $2, I really don't care; that's one more person who knows my work.  I doubt that the big stars in Hollywood care, either.

Who does care are the bean counters with fiduciary responsibility to shareholders for publicly traded media companies.  But of course, the sort of person who buys pirated DVD's (probably of unreliable quality) can't afford the legitimate ones for $20 or more, or can't afford $10 a head for a movie.

But this is "physical" piracy, not stealing off the Internet.  The people who made the DVD's probably circumvented DMCA copy protection and copied real DVD's, or somehow got them through P2P.  SOPA and Protect-IP wouldn't stop this activity anyway.

Did I say anything? No.  But somehow my body language probably wasn't inviting. The man did not approach me.

It would appear as if some people make an underground living, maybe even supporting families, by selling pirated DVD's.  Police certainly know this.  They probably have more pressing things to worry about. Would someone in a position to be drawn into this "innocent" and understandable "scam"  (and probably not as harmful as Hollywood says) be vulnerable to being recruited to more obviously dangerous activities?  Police intelligence perhaps should look at this activity as an early warning.
Posted by Bill Boushka at 3:07 PM