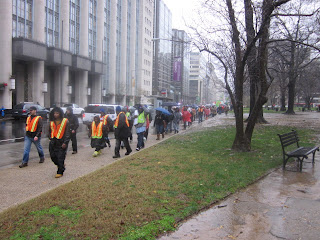 Today, AlterNet offered an email with a link to an excerpt from a book by Corey Robin, “The Reactionary Mind: Conservatism from Edmund Burke to Sarah Palin” (2011, Oxford University Press), with an HTML title caption “Understanding the conservative mind; why reactionaries from Edmund Burke to Sarah Palin have fought real liberty”.  When I checked this afternoon, the content had disappeared; only the ads were left, and comments. I don’t know if this was a copyright problem or what.  But I can comment on what I remember from reading through the excerpt
The excerpt mentioned the conventional wisdom that conservatives want liberty and liberals want equality.  Both are rather meaningless in the total abstract.  But then it mentioned the idea of “agency”.  The reactionary mind does not want someone socially or politically subordinate to become his or her own moral agent (I had suggested the opposite early in the Introduction of m first “Do Ask Do Tell” book (1997)
In fact, I’ll quote my own paragraph here (and, hey, I don't even need to claim "Fair Use"):
“My central question on personal values is this: do we believe in the principle that every adult person is totally responsible for himself or herself? This objectivistic notion would limit the responsibilities of government to consequentialism. Individuals, through their own conduct and performance, would become their own moral agents. An individual will, in principle, be held accountable for her actions regardless of biological or circumstantial parentage. When may an individual rightfully set her own personal priorities, and when should she consider the recognized and established interests of family and larger community first?”
To the reactionary, an established social order and hierarchy is important to sustaining a civilization and culture.  He or she imagines that those farther down in the food chain owe their lives and protection to those at the top, and do not have a right to speak up and be heard until they can take the responsibilities of those on top.
In a world of pure meritocracy, those who are most capable would both wield power over and have responsibility for those who had accomplished less or who could take less responsibility for others.  Getting married and having successful children would be a major power and responsibility (both) for those with station in life.   In our culture, meritocracy tends to be measured by money; but in animal societies (or maybe with people on other planets), it may not be.
But, of course, as the Left correctly points out, people don’t start out in the same place in line (or with the equalizing place on the jogging track according to lane).  But the Right sometimes counters with the idea that everyone “pays his dues” (by proving he or she is good enough at basic things related to gender roles  -- for men, going through group rites of passage and often the risks of military service). Furthermore, the Right promotes the idea that strict sexual morality (no experience of sexuality outside of marriage and without the openness to procreation, a Vatican idea) would limit the tendency of those in power to abuse it. In practice, history shows things never work out this way.
So the Left tends to propose political and social structures “for the People”, but pretty soon the Left builds its own power structure that (eventually) becomes as oppressive as anything on the Right.  That is, Stalin (and Chairman Mao, and  Pol Pot) were as bad as Hitler.  Totalitarian structures, whether from the far Right or far Left, always try to bind and indenture the individual who doesn’t win the battle for the top (or may not be lucky enough to even compete for it).   Sometimes the Far Left makes a quick switch to the Far Right (look at China – “The People’s Republic of Capitalism” -- and Russia).  Hence, progressive democracy and “classical liberalism” gets pulled toward libertarianism.  There is still a lingering risk that the individual, left to his own expressive aims and perhaps without a good ability to bond to other people, could develop purposes, in fantasy, that defeat the purposes of liberty.
In my own case, I was born into economic circumstances that were certainly favorable enough, but I could not “compete” properly according to my biological gender (male) to perform property (protect women and children).  Hence, I came to find most of the conventional social mores and indulgences expected of me (regardless of any choices I had made, note) to involve subservience and potential humiliation.  Conventional dating and even heterosexual overture became, in my mind, a proxy for submission (Warren Farrell’s argument in his 1993 book “The Myth of Male Power”).  On the other hand, physical submission to a male whom I really admired became desired – and this gets into the “polarities” (Rosenfels) that I have talked about before.
None of this should be lost on the debate going on today about the “open Internet” and the problems with controlling piracy and abuses of reputation, because of downstream liability immunity, as covered in recent posts here.  In the mind of the Reactionary, someone like me doesn’t have the “privilege of being listened to” himself because he couldn’t take on (through successful competition) enough responsibility for others.  So, it’s easy to think that protecting jobs for those with “families” with any means necessary must be the only goal (and this involves a “reactionary” attitude from the Left as well as the Right).  Keep all this in mind in tracking “SOPA and Protect/IP” v. “Keep the Web Open”.
Posted by Bill Boushka at 11:23 AM

Labels: privilege of being listened to