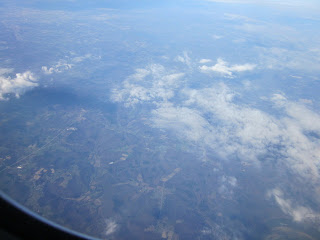 Mozilla has  joined the bandwagon in opposition to SOPA.  When I went into the Mozilla browser tonight, I got the “Stop censorship” banner and the link gave Mozilla’s take on SOPS, here.   Mozilla claims that sites can be blacklisted even for links they give to other infringing sites.   It also claims that SOPA has widespread support in Congress. (This blog post title used past tense for Mozilla, it could well be present tense.) 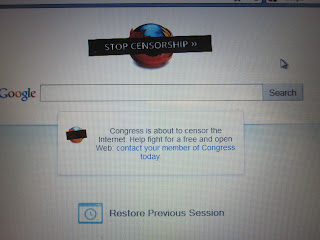 Major Internet companies, including Google, posted paid announcements on the issue today, which has exploded.
Ceclia Kang of the Washington Post has a brief story on the issue today, link here.  It seems to be putting “jobs”, in media businesses that are hurting, against amateurism as well as against real piracy.   Major providers say they cannot offer the publishing portals that legitimate “amateurs” use if they have to be responsible for the bad actors in a downstream fashion.  The problem is that it could lead to site shutdowns when a single infringing song or movie appears on a site (even like YouTube), at least according to some observers.
The US Chamber of Commerce has supported the bill, and some Silicon Valley giants have threatened to leave it.  The Chamber says it would “improve the quality of content on the web” but it could cut out the ability of amateurs to remain present if web providers could be held responsible for what they post. Yahoo! already left the group.
It's interesting that Kang's reporting for the Washington Post sounds ominous, since the Post has supported some kind of Protect-IP before.But Mike Masnick of Tech Dirt apparently attended the hearings today and blogged (and tweeted big time) about them, here , saying that a number of Congresspersons did have good questions, and that the Judiciary Committee is very technology-lite in its composition, making it dangerous and unable to comprehend the consequences of legislation.  Interesting is his refutation of the idea that one can find some specific  pirated movies on YouTube.
Google has its own brief blog posting on SOPA here.  Counsel  Katherine Oyama says some law is needed to zero in on actual rogue sites (such as those based on misspellings or tld’s), but that the Senate Protect-IP and presumably the House SOPA are too generally worded and would invite abusive litigation (remember Righthaven?)   In the blog posting, there are links to detailed statements submitted as testimonry.  These statements are particularly concerned with the idea that a whole site could be disconnected (denied payment, removed from search engine results or have domain DNS links canceled) because of a small portion of the site or because of the actions of even one user -- it's the old problem of giving detention to the entire school for the actions of one kid!  All of this needs more detailed study soon. The Game Politics link is here.
I’m still trying to determine what the bill really would do, especially in the downstream liability and safe harbor areas – but maybe nobody knows!   When I get my :Do Ask Do Tell" made, will I lose revenue, and will people in the movie business lose jobs because of piracy of my material?  Only if I have an actor like a precocious Taylor Lautner saying "You will be slaughtered." 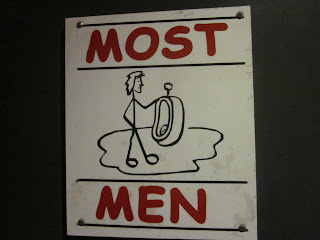