Money: when "fiat" it means less (and socialization means more) 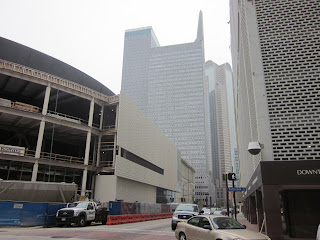 The Opinion section of the Washington Times on Nov. 22 has a piece by Cato Institute fellow Richard W. Rahn, “Making Money Disappear: Currency not tied to gold or other standard becomes worthless”, link (website url) here.
I’d also like to call attention to an Atlantic article (reprinted Sunday in the Dallas Morning News, my "entertainment" while having a burger at JR’s – watching the Redskins lose when I was in Big D), by Megan McArdle, “The Financial Folly of Fairness”, link here.
All this is important to my own writings. Rahm points out that “fiat money” is an exchange medium, declared by sovereign government as currency, but not tied to a limited physical asset (gold, or anything permanent and scarce of intrinsic aesthetic value).   Wikipedia doesn’t emphasize the lack of physical standard, and I’ve often used the word “fiat” for any sovereign currency, which isn’t technically correct.
It’s useful to think about what money means in a “perfect market”.  If I own a gold coin, I own the proportion that it represents of the world’s goods and services. I surrender it to purchase something. If I loan it to you, then you acquire the goods, but owe me, and must pay me back later with slightly more coins (or troy ounces).  There’s a slight risk you might not.  (So I might check your FICO score first, or even try to gauge your reputation online from search engines and Facebook.) The same is true if I deposit the coin in a bank. It owes me on demand, but there is a slight risk that it might not redeem it.  McArdle argues how such ideological simplicity fed the Great Depression (bank failures and wipeout of savings), and she could be right.

If you tweak the meaning of money, you can make an economy seem to be safer for most people.  I know libertarians don’t like to hear this.

As a writer with some screenplays and novel manuscripts to try to get published or made soon, I can say that I’ve toyed with the notion that another civilization (say, a planet 30 light years away) might get by without money (fiat or not).  How?  Well, other animals (lions, wolves, prairie dogs  and beavers, dolphins and orcas) have complex communities of individuals without currency.  Instead, they seem to have rigid, authoritarian (alpha-male driven) social structures (not to the point of beehives).  Could animals with human intelligence.  Maybe that’ the orcas.  With human intelligence and the ability to make tools – machines – and set up a division of labor across an economy?

I think it’s possible, and disturbing.  (I think Clive Barker tinkered with this idea about the connected dominions in his 1991 novel “Imajica”.)   On another planet, you could probably have Facebook and not money, but you would have very rigid social structures and other ways to see who “paid their dues”.  And people would have to watch each other’s back, play “brother’s keeper”.  But maybe you could have a benevolent timocracy as government – for most people.  But, however you cut it, something bad would happen to the individuals who “didn’t make it”.


Of course, we say, that’s the point of a market economy. Strict enforcement of individual “moral hazard” makes it fair. But it can’t.  What about the “losers”?  We have to deal with the fact that people don’t start in the same place in line (even on an adjusted jogging track).  So fairness is more than just individual justice; it has to do with socialization (especially “family”)  and living in a community.  Hence, Megan’s arguments about what really works.

Many of us experience the first two decades or so outside of the “market”. Our parents and schools control us, and our futures are impacted by how well we do. Grades become a currency. When I was coming of age, grades could determine whether you (if a male) could be drafted into combat – sacrifice for others.

All of this matters as we contemplate all the calls to regulate the Internet, from SOPA (aka Protect-IP) to gutting Section 230.  People sometimes do get forced to give things up that mean a lot to them and play Brother’s Keeper.  We have to watch the current debates very carefully.
Posted by Bill Boushka at 5:14 PM