I visited the Flight 93 National Memorial in Pennsylvania today 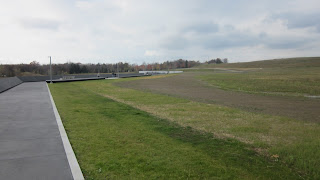 Today, I visited the new, permanent Flight 93 National Memorial near Shanksville, PA, NE of Somerset. I had reported on a temporary memorial visit on my “International Issues” blog on Aug. 6, 2010. 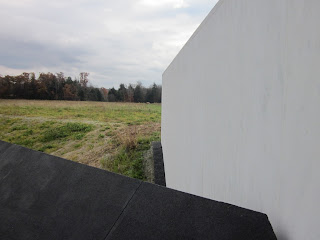 I entrance to the memorial has been moved to US 30 (away from Shanksville), and the drive from US30 to the parking lot is long, 3.5 miles, at 25 mph.  The Park Service does not (yet) charge admission to visit the memorial. The website (link)  gives directions and hours of operations. 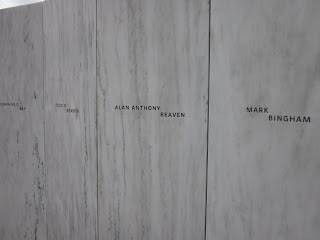 The actual crash site is marked by a large rock, about 400 feet or so from the walkway; the intervening space is said to be a cemetery for unrecovered remains.  There is a white wall, in a style similar to the Vietnam memorial in Washington, with the names of all passengers.  There is a barn and farm visible from the memorial, but it is not the same barn that appears in the usual pictures. 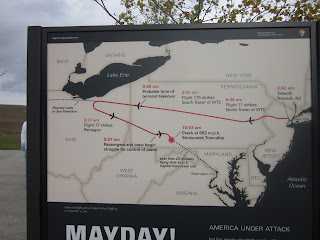 The site appears to be on top of the Allegheny Mountain plateau (on a site that was once a small coal strip mine), and is probably at about 2100 feet or so, and will have cold winter weather. 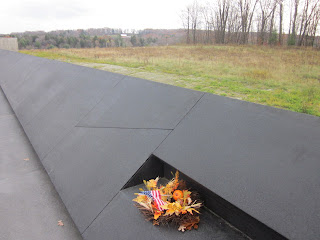 The plane could have crashed into a school in Shanksville had it not crashed sooner.  It would appear that it could have crossed the Pennsylvania Turnpike very near the west entrance of the Allegheny Mountain Tunnel.
Park service employees point out that United Flight 93 was delayed over half an hour, and that had it left on time there could have been a real possibility that the plane could have hit the Capitol or White House, had it not been shot down (on orders authorized by Cheney).  However, even if it had left online, passengers might well still have gotten calls from loved ones earlier and known that they had to act (as the second WTC tower had been hit by 9:03).  Wikipedia points out that the hijackers took longer to act even with this flight leaving late. 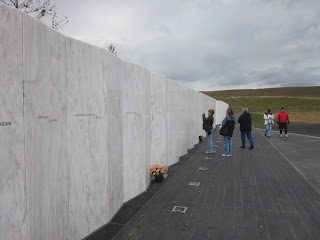 Park service rangers say that UA Flight 93 turned around at normal altitude, south of Cleveland (map above). A relative of mine says that people in Kipton, Ohio (near Oberlin) saw a plane turn around at low altitude an nearly crash near Ohio Route 511, but this could have been a flight called back by air traffic control, and unable to turn around without difficulty. 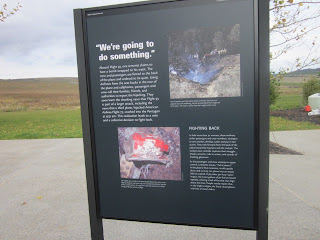 The week before 9/11, as indeed the period coming up to it, had bizarre warnings, some of which have been reported in the media, such as a White House memo in early Aug. 2011 warning about eminent threats form Al Qaeda, and a weird report in Popular Science published around Labor Day, 2001, warning about possible EMP microwave attacks.  Some people reported circulation of an email warning about the date 9-11 and thought to be spam or circulated by a computer virus.
Although the access to the Park has been moved several miles, there is one small memorial site on Lambertsville Rd with a flag. 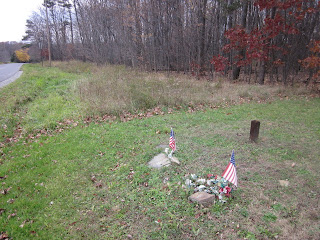