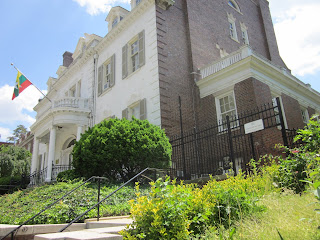 Wednesday, Aug. 24, The Washington Post ran a provocative editorial (on p. A18) about Protect-IP, “Safeguarding Creativity: Bill would help combat copyright and trademark offenders on the Internet”. It defends the Protect IP (Intellectual Property) Act introduced in the Senate by Patrick Leahy (D-VT) and reports that a version will be introduced in the House in September.
Curiously, today’s editorials (as of 1 PM Wednesday) were not accessible online yet at the Post website.
The editorial assumes that most counterfeit or infringing or pirated products are being “sold” from overseas websites, and seems to assume consumers won’t recognize the frauds easily.
It also says that service providers or other webmasters are not liable for linking to infringing sites (this sort of concern had come up back in 1996 with the Communications Decency Act, before Section 230 was developed), and tries to answer the concern that whole sites will be at risk for inadvertent inclusion of material from fraudulent sellers. It does say that webmasters of service providers must take “technically feasible” or “reasonable” measures to follow court orders, and it is in that area that ambiguity remains, as well as with the idea that any begrudging party could bring action.
One problem is that different content providers have very different “business models”.  Established media companies, publicly traded, perceive that they have a fiduciary obligation of “zero tolerance” of illegal copying, and established “stars” perform in a system that encourages litigation for its own sake. Emerging artists want a system that encourages sharing as much as profit margins. Unfortunately, they can become shut out of the system some day in the effort to protect an old corporate content system.