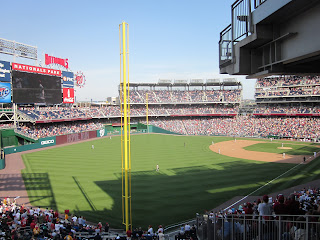 Apparently professional sports teams are now sensitive about how players and particularly draft choices use social media. Adam Kilgore reports in the Washington Post (Aug. 10, p D5) that the Washington Nationals (baseball) scolded a draft pick Zach Houchins for anti-black and anit-gay epithets in his Twitter feed, link here.
The player indicated that he had viewed Twitter as like a quasi “private” conversation (almost like email).  It’s apparent that many users view social media as an extension of personal life with some privacy (however they use settings), not as “publications”.
Bill Ladson even has a story about this on mlb.com,  here.
A number of major league teams, including the Nationals and Phillies, have signed on to the “It Gets Better” project.  MLB is now very sensitive to its public image with respect to the conduct of its players, especially after the steroid scandal.
On the field, Stephen Strasburg is now doing minor league rehab starts, and MLB.com offers an embeddable video on his return.  The Nats are also “experimenting” with former Yankee pitcher Chien-Ming Wang, who comes back from shoulder surgery. In 2011, Jordan Zimmermann (they call him “John the Baptist”), returning from Tommy John surgery, has been then Nats’s best starter.
Posted by Bill Boushka at 7:14 AM