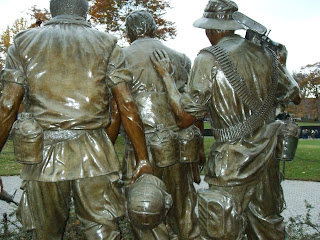 Eric Niiler has a provocative article on the “Health & Science” page of the Tuesday July 19 Washington Post, p E1, “What sort of person are you? Facebook profiles offer clues,” link here.
It’s pretty scary that employers could turn to automated Facebook (and perhaps Twitter and Blogger/Wordpress or Google search) profiles in lieu of “personality tests”.  People get excluded from jobs based on these tests without a human being looking at them.
A study examined the usefulness of Facebook in predicting extroversion, openness to experience, conscientiousness, agreeableness, and neuroticism. Extroverts tended to have more Facebook friends who themselves had not befriended one another.
Did anybody see where this “online reputation” issue would go a few years ago?  Not really. But it may be pretty hard to see a person’s own biases from his or her public online activities, and this can be an issue in the workplace for those with the power to make decisions about others.
The military, even as "don't ask don't tell" hopefully ends, is studying how social media could help predict "unit cohesion".  This is an ironic role for Facebook to play.
Notice that Mark Zuckerberg's own Facebook profile is titled "Public Figure".  That generates "right of publicity" (and reduces "right of privacy").  His reclining sweater-blazer black-and-white portrait photo is rather interesting in its ambiguity.  Go ahead and check out his "feature length" YouTube video on Web 2.0; I may have embedded it before, link.
Posted by Bill Boushka at 6:47 PM