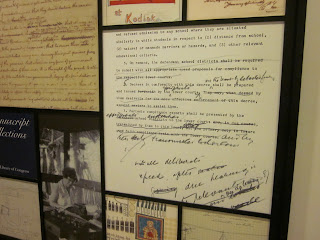 Randi Zuckerberg, Facebook’s director of marketing and founder Mark Zuckerberg’s older sister, called for an end to Internet anonymity in a recent roundtable on cyber bullying. "It has to go away," she said.

The link for the story in the UK Daily Mail about the Randi's remarks  is (url) here.
Facebook requires members to use "real names". An  EFF (Electronic Frontier Foundation) story, (by Jillian York) discusses Facebook's policy (and Google's below); there is a  good question as to whether "real name" means "legal name" and would exclude a common nickname.
Earlier stories in the media have presented a theory by Mark Zuckerberg that anonymity shows a “lack of integrity”  -- which is becoming very much a generational concept.
On the other hand, civil liberties groups (the ACLU) and Internet free speech advocates (like Electronic Frontier Foundation, mentioned above) and even privacy groups (EPIC) have long defended anonymity, which would seem essential for dissent movements overseas, as with the “Arab Spring”.

Pseudonyms have long been used by actors, performers, musicians and authors, as was the case back in the 19th Century when female authors used men's names.  In recent years, content creators have often invented nicknames for themselves and even trademarked them (sometimes to distinguish themselves from others); this could become a problem for any service that insists on a legal names policy (which appears to be the case with Facebook).  Sometimes people have used pseudonyms to distance themselves (or "protect") their families or business connections.

Google-Plus appears to have a more flexible identity policy that encourages the use of a nickname if that is how someone is generally known; here is the link. This policy appears to be in a state of flux.  Blogger does not appear to have such a policy from what I can see. (Google accounts and Blogger accounts have their own profiles and right now are maintained in two separate places; it wouldn't surprise me to see this change in the future.)

It seems to me that a service provider could allow pseudonyms and not allow anonymity or false or misleading names.
I use my legal name “John W. Boushka” on Facebook, but used my nickname “Bill Boushka” (“Bill”=”William”) for my books and blogs. This was potentially an issue a few years ago in a supposed “self-defamation” situation when I called a character “Bill” in a screenplay scenario and a school system presumed that was me (July 27, 2007).

You can see a complete explanation of my "identity" for searching on my Blogger Profile.
Ending anonymity might make managing "online reputation" cleaner. If people could not post disparaging comments or videos (or tag images) about others anonymity, employers might not find as much false and defamatory information about job candidates on the web.
It might also make blogging policies and "conflict of interest" situations testier for employers.
Posted by Bill Boushka at 9:30 AM

Your security is important and should be given priority over all the other factors while browsing online. In the wake of such a fact, utilizing efficient methods such as 'Covert Browser' or VPN services is worthwhile and indeed helps you to browse through the internet in assured anonymity. internet anonymity