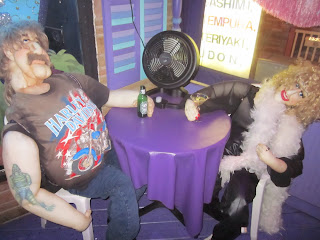 NBC Washington (formerly NBC4) reports that a man , with the help of the ACLU-NCA (American Civil Liberties Union of the National Capital Area), suing Washington DC police for detaining him for a while for taking pictures of police activity from a distance without interfering with it.  He also recorded audio.
The ACLU has a short write-up of the incident here.
The explosion of mobile photography technology makes it more likely that average citizens could photograph police activity without being easily noticed.
View more videos at: http://nbcwashington.com.>
In a related controversy, a few business property developers have tried to prohibit all photography on their property, which may be their right (however foolishly conceived), but they have actually tried to prohibit photography in all downtown Silver Spring, MD, which they say is a “private space”.  I have taken pictures around the AFI Silver, the Discovery Center, the Metro, and the wall art many times with no problems.   Here’s an old story by Marc Fisher, the Washington Post, June 21, 2007, link.
“Glad You Asked” of the Journal Times (what city?) has a column on the law and photographing of people in public places, here However, in this era of Facebook tagging, online reputation experts are becoming concerned.
On June 23, I wrote an article about a new law in Tennessee that would try to limit photography of persons in public (probably unconstitutional), but is seems as though this issue crops up a lot, particularly with photos of police. There were  a couple cases reported in Massachusetts reported in 2008, according to Pixiq (Oct 2008), here  (e.g. photography "without consent")..
There was also a case in Maryland a couple years ago on I-95 (an exit or overpass) between Washington and Baltimore. I recall some kind of esoteric doctrine (in Maryland law, at least) about who gives consent, but I didn’t think it applied in a public place visible to the public.  Gizmodo has a story about this case by Wendy McElroy, here.   Part of the problem here was the video of the incident was published on YouTube subsequently.  Gizmodo conflates the First and Second Amendments with a story title, "Are cameras the new guns?"
There has also been some legal controversy over where private citizen’s “wiretapping” (by audio devices) overlaps photography.
Stay tuned on this one.  It’s a conundrum – that is, a mess.  Maybe Jeffrey Toobin on CNN could talk about this.
Posted by Bill Boushka at 9:35 PM