Should parents require kids to "give up" things for family bonding? 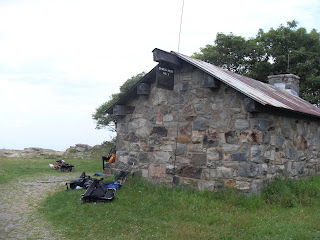 Occasionally, at various mainstream churches, I hear mention of scheduled periods of family bonding and sacrifice.  Sometimes this takes the form of something like a 30-hour fast for the young people. Other times (as has been mentioned on Oprah), it’s a week without access to electronics or the outside world. It may take the form of a week roughing in the wilderness as a family with no modern conveniences.  (I think something like this happens in the upcoming movie "The Future" judging from the previews.)
Is this a “good idea”?  Is it different strokes for different folks?
I’ve never done anything like this, but I can imagine doing this with “my family” if I had one, and if I had the “basic life skills” to see it through.
What are the reasons?  They overlap, but there are a few areas:
(1)    Our “civilization” is being shown to be more vulnerable that we had thought. Maybe we’re just more aware of it now, but certainly, since 9/11 (and in the wake of hurricanes, wildfires, earthquakes, tsunamis, possible pandemics, and the talk about the possibility of long term massive power outages because of solar storms or even deliberate attacks), there’s a lot more talk of integrated family preparedness than there had been fifteen years ago.  A major shock to our civilization could force many people to find new ways to make themselves relevant locally, whatever their talents in a globalized world
(2)    Technology seems to give people independence, but it requires doing more for “yourself” too.  How many people can change their own oil now?
(3)    Demographic and political changes make us question the premises of the hyperindividualism of recent decades. We’ve penalized parenting and made it hard for reasonably affluent populations to replace themselves. People are living longer, but can continue doing so without ruinous public expenses and debt only if families re-establish more solidarity and do more to take care of their own, and this includes those who did not have their own children.
It’s apparent in the writings of many “social conservatives” and the “natural family” crowd, that many people see married parents as having both the power and responsibility for making their children into social creatures, responsive to the extended family and community, as well as individuals.  (They may, for example, expect their kids to learn to take care of younger siblings or to be prepared to raise siblings’ children after tragedy – a theme often explored in Hollywood.) This may seem to contradict the idea that a parent wants to turn loose into the world confident individual young adults.  But some parents may find this prerogative and expectation as essential to making their marriages last, although not necessarily so for triggering the romance that leads to the marriage.  Same-sex relationships seem problematic to some people in this mindset because there is some separation in one’s most intimate moments from openness to serving the purposes of the family one cane from (by extending it with procreation).  It seems a bit of a paradox that one would need to be open to serving the purposes of others in one’s most personal moments and thoughts in order to become an individual.  Perhaps the balance between individual and community and family is much more subtle in difficult in a democratic society that must ultimately value each person within the family unit than in an authoritarian society where there is (always) some set of “moral postulates” (not always religious) to rationalize the way people are measured and sometimes separated and where there is support for moral self-righteousness.   It’s interesting to me that most extraterrestrial  societies depicted in science fiction are quite authoritarian or even totalitarian.
Posted by Bill Boushka at 7:34 PM