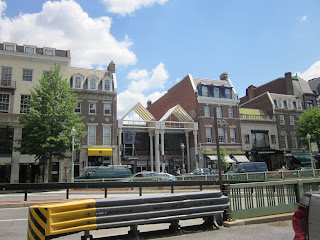 Monday, The Washington Times ran a telling op-ed in the “Righteous Indignation” column by African-American conservative Armstrong Williams, “Gresham’s Law”, on p A6, link here.   Yes, here we go again with “absolute personal responsibility” (more than just South Park’s), but this time with a twist.
Williams characterizes an “absolute lower class culture” based on the concept of common victimization. If one can blame others, then there is no incentive to postpone gratification and aim for individual accomplishment and excellence in any pursuit that adds economic or artistic wealth to the community. Oddly, he does recognize the “accomplishments” of this “culture” in pro sports and pop music.
Of course, it’s obvious that we don’t all start at the same place in line, even adjusted for “track geometry” (and that could stimulate some good high school math test problems).  That can indeed provoke the “indignation” that tends to regard the supposed individual achievements of others as undeserved.
I was caught in this situation early in my life, in a kind of perfect storm. My parents were in an advantaged situation, comparatively, for the 50s; but I could not perform well according to physical and gender norms.  In my day, that took on a moral aspect that took from the fantasies of both the far Left and far Right, both of which can become obsessed with assessing what individual people “deserve”.  Remember Mao’s cultural revolution?
The answer in earlier times seemed to be to focus on sexual morality. Remember the adage “sex is only for married people?” from WB’s “Seventh Heaven”?  Of course, this quickly moved to anti-gay attitudes.
The idea was that if everyone had to tow the line in this area, somehow society was fairer.  Inequality among people existed, but a lot of it had to do with ability, and it was the responsibility of families, not society, to care for people relative to both capability and “station in life.”   My own parents believed in this arrangement. Of course, this arrangement tended to encourage familial and then political “power structures” that quickly became corrupt.  My father used to say, “absolute power corrupts absolutely.” Authoritarian social structures can remain stable and "sustainable" for a long time, but sometimes they haven't.
When I grew up, I understood that individual achievement (and delayed gratification) was an important value and found hope in it for myself (my piano playing and music, for example; practicing long hours means delayed rewards).  But I also saw that, at the time, a big issue is how much of life is about the individual on his own, and how much of it is about fitting into the community, and sometimes sharing sacrifices for it?  I grew up during the time of the male-only military draft.
As my own tribulations occurred (already discussed here), my interest into retreating into “fantasy” became a “therapeutic” issue, especially in my 1962 stint at NIH.  My "fantasies" had a lot to do with what attributes people "needed" before I would be "willing" to experience emotion for them. Now, fantasy itself is harmless and may be a good thing (stimulating artistic expression), but others worry about what fantasy says wbout what makes someone tick, about his existential purposes.  Others can see a threat in one’s fantasies: if one is allowed to indulge them too much, that can set an example undermining the familial commitments of others, and maybe even lead to dangerous social or political trends (the lessons of history). Those beliefs, of others in my culture then, became an issue for me.
So what went wrong for me, earlier in life and again recently, is about problems a lot more subtle than just hard work and delayed pleasure.  It was about connecting to a community and sharing its goals and risks.  When one refuses to learn interdependence (as well as independence) too long and then something goes wrong, beyond one’s control, it really can be over.  We all have our skins in other people's "games", like it or not.
Posted by Bill Boushka at 7:56 AM