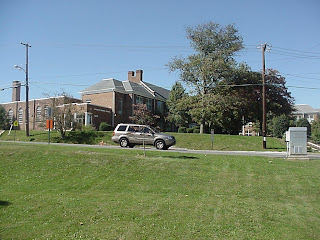 The Washington Post, in a front page story by Kevin Sieff, reports Friday morning (March 25) about a move by the Virginia Board of Education to require school districts to develop policies regarding social media use by teachers. The link is here.  The policy would not by itself involve the use of social media at home until it affects the school.
Teachers have found that Facebook groups can be used to convey assignments without requiring friending.  Facebook, remember, was born in a university campus environment.  But it’s widespread use for “everything” could invite abuses and security problems.

Teachers have also found that Facebook can provide a convenient platform for project assignments, such as creating profiles for characters from Chaucer's Canterbury Tales (or Shakespeare plays). I've recently recommended a classic film "A Canterbury Tale" for English teachers on my movies blog.

Twitter is interesting because it encourages terse writing. A number of people, some of them media personalities like Ashton Kutcher and Anderson Cooper (and many others), have developed followings because of their ability to communicate so much in fewer than 140 characters.
Some smaller companies like Schoology), Moodle and Blackboard provide for a much more easily regulated form of social networking.
Somewhere around 2005 or so, schools started discovering that students could find web postings authored by teachers at home with search engines, just as social networking sites were starting to become popular.  Myspace was more popular then.  Shortly thereafter, media and industry discussions (and entrepreneurial responses) about the problem of “online reputation” ensued.

Sometime around 2007 or 2008, after I had stopped subbing, I had some email discussions with the Arlington (VA) school system about getting involved in training in "online reputation".  It got bogged down in procedural bureaucracy with all the state regulations of how content can be developed for schools.  But I may get back to this initiative again.
Posted by Bill Boushka at 6:38 AM

Labels: my history as a substitute teacher

Just trying to get through to Bill Boushka. The ex-gay movement will prevail. There is no basis for the "gay-is-normal" idea in fact, logic, ethics, or constitutionality. "Gay-affirmative science" is rubbish.

I guess everyone has a right to his or her own "opinion".