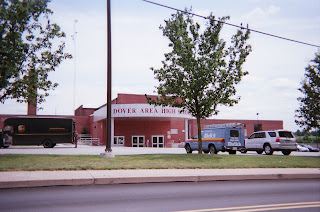 An English teacher, Natalie Munroe, in Doylestown, PA (Central Bucks East High School), blogging unfavorably about her student and school under the pseudonym “Natalie M”, has been suspended with pay, after her blog was “outed” and went viral.  She did have a picture of her. It was up for over a year before being found, because search engines would not have found her name.
The news story is by Andrea Canning and Olivia Katrandjian on ABC “Good Morning America”.  It sounds as if she might have been writing about identifiable students. One of her comments was “I hear the trash company is hiring.”  (Remember “Trashcan Man” from Stephen King’s “The Stand”?)
The blog asked "Where are we going and why are we in this handbasket?”  Actually, I see that's the name of her blog.  My aunt used to say that!
Her lawyer says she will litigate on First Amendment Grounds if fired.   ABC also offers a link here to another video “The dangers of Blogging.”

The URL for her blog is now easily found, here.  She gives a vivid account of her suspension ("Bloggate: Day 1, etc.). She never gave her last name, and never mentioned the school, and the school (or school district) did not have an employee or teacher blogging policy.

A site called “Philly Burbs” and “Intelligencer News” has a story “Blogging teacher blogging again”, story by Christina Kristofic, here. There are several older stories.
Again, my own personal experience with this problem as a substitute teacher is detailed here July 27, 2007. Since my incident occurred in 2005, it really was too early for blogging policies or much awareness of social media. Remember, Heather Armstrong's doocing had occurred back in 2002!
Picture: Dover PA , where there was a controversy over creationism or “intelligent design” in school curriculum in 2008.
Posted by Bill Boushka at 9:41 AM

Labels: employer blogging policies, my history as a substitute teacher