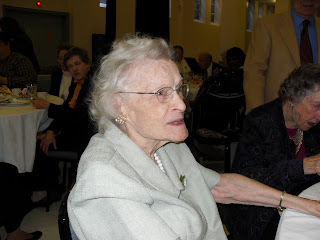 On Tuesday, December 14, 2010, my mother, Margaret Esther Davidson Boushka, passed away, of heart failure, at age 97, in the Capital Hospice Facility in Arlington VA. The graveside service was held today, the Day of the Winter Solstice, at Columbia Gardens in Arlington. It was well attended. The Arlington Funeral Home has a memorial for her on line here.

I generally don’t discuss family matters in my blog entries or social media posts, although I do go into them in my books (especially the first one). But I do want to communicate to visitors that this has happened in my life. My father had passed away on January 1, 1986, when I was living and working in Dallas. His final service was held at the same place.

Since I have lived a “different life”, I am not as given to some of the demonstration of emotion as are many people in family situations.

Mother was a stay-at-home mom who experienced her life through family. She did not expect "personal sovereignty", self-expression or self-display, or the absolute right to choice, the way modern society has come to encourage. She accepted that some circumstances were given. My life went in a direction that I do not believe she understood fully in the usual cognitive sense. 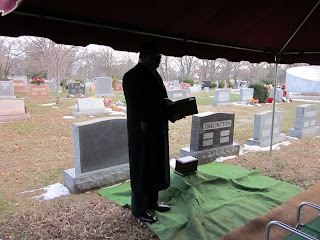 I was in Washington DC, on the Metro, on the way to an SLDN rally on December 10 (concerning the need to introduce a standalone bill to repeal “Don’t Ask Don’t Tell”), when I got a call from a caregiver regarding a sudden turn. I got another call during the rally, at the most intense part of the speaking. I stayed to the end of the rally (one hour). My Mother lived long enough (which was approaching 100 and surpassing many medical obstacles) to see an effort in which I had participated for so long, however behind the scenes (yet out in the open, on the Web) succeed.

The last time she was able to understand me in the Hospice facility, the Hospice music radio played the close of the Symphony #2 by Robert Schumann, a work that has unusual significance for me, with its famous theme in the Finale. That is the last music she ever heard. I have never seen that theme (“A-B-C_E-F—G_F-E”) in a Baptist hymnal, but I wonder if it appears in the Lutheran hymnals. The year 2010 marks the composer’s 200th anniversary.

Pastor Jeffrey Haggray, of the First Baptist Church of the City of Washington DC, talked about the Virgin Mary’s Magnificat, and about how the words had long been part of sacred tradition, even if obscure to many people. He also mentioned her (and my) dedication to moral causes.

As I approached led the procession in my car toward the tent, the Sirius 2 Channel 80 station played the Sibelius Symphony #5, another work that had unusual significance for me during high school days. The music could be heard by others as I stopped. As we departed, the station was playing the conclusion of the Mendelssohn D Minor Piano Trio (which is triumphant and major and happy). 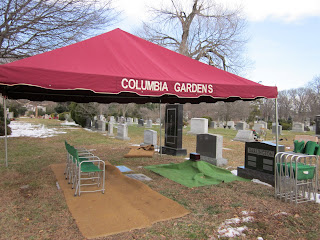 I had attended an outdoor service for my aunt, June, in Ohio in October.

For me, life enters “a new chapter.” I am serious about the idea of a “Do Ask Do Tell” movie and company, and will post more soon as I am able to be specific. That will include restructuring of much of my material on the web.
Posted by Bill Boushka at 2:34 PM