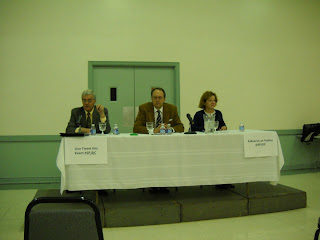 The First Baptist Church of the City of Washington DC held a forum this evening about Journalism Ethics, cosponsored by the Society of Professional Journalists, DC. (twitter at “#SPJDC”). It was preceded by a hors d’ouvres supper.

The SPJ Code of Ethics, passed out in the meeting, is here.

The general tone of the comments was that user-generated content and social media (and “amateur” blogs which sometimes have considerable original news substance) were presenting ethical dilemmas for newspapers in verifying accuracy of stories. The panelists also drew a distinction between “fairness” and “objectivity”, the latter of which is never completely achievable.

There was also commentary from the panel about the recent incidents involving NPR (Juan Williams) and MSNBC (Keith Obermann). One panelist expressed the view that the firing by NPR was appropriate because he could never be “trusted” again to report on many issues. Alexander suggested that if Washington Post news stories opined, the Post would lose readership. The view also came out that not only should journalists not make campaign contributions, they also should not sign petitions and some people believe they should not even vote!

Alexander explained the unusual role of the ombudsman, who has no boss; he also said that in a newspaper, the newsroom and editorial room are completely separate and sometimes act as rivals.

There were many interesting audience questions. One deacon mentioned the lack of sacrifice given our two wars (no draft, no rationing) and asked how a newspaper would report on this, and the general answer was that a reporter would have to solicit many views on this and write a balanced piece.

I asked whether the “no political activism” policy for journalists could extend to managers in the general workplace (under hostile workplace concerns). No public answer, but there was a private conversation later, and it seems to be an unexplored area, yet intuitively sounds like a bug HR matter. Furthermore, panelists said that newspapers do agonize over crafting social media policies: while social media are important to their businesses, it's obvious that it doesn't take much to slip into political advocacy.

SPJDC also passed out a handout “Demanding an end to censorship caused by ‘Mandated Clearance’”. The statement starts out with “Whereas, it has become increasingly common for public agencies at all levels of government to prohibit their employees from communicating with journalists unless agency public relations officials are notified and/or those officials grant clearance or permission for employees to speak out…” I could not find a link for this online at SPJ.

I wondered, do these policies include “amateur journalists” – that is, bloggers? Does this link back to the “pre-publication review” policies of some agencies? 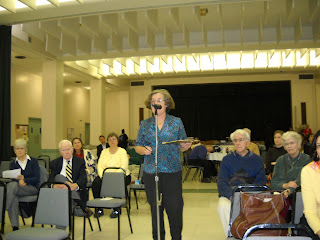