So, life is not fair; but the "different" may experience "sacrifice" more 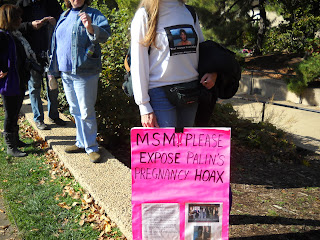 In debates about moral problems, most people will ultimately become concerned about the effect moral issues have on their own individual freedom and responsibilities, rather than on group or partisan views. These concerns become particularly sharp for those of us who are “different.”

The simplest view, then of modern moral values seems to be the libertarian one: an individual may, within a market system, do as he chooses as long as he or she accepts full personal responsibility for his actions. But, I guess, it isn’t so simple. The libertarian view does not take into account “inequality of opportunity” or hidden sacrifices; it allows non-performing adults (who may be so because of circumstances they cannot control) to drop dead on the floor.

At the other end is an authoritarian view, which makes rules that everyone must follow, on the theory that everyone must share some of the non-economic “sacrifice” and “risk” -- have their own skin at stake in the welfare of the family or group. The most extreme example of this kind of thinking could be exemplified by the 1960s “Cultural Revolution” in Mao’s Communist China, where everyone “took turns” becoming a peasant. A more familiar setting was the Vietnam era male-only military draft, with all the criticisms of unfair deferments. In fact, “sodomy laws” of the past could have been construed as an indirect attempt to make sure that every adult takes part in having children and raising the next generation. In more recent history, the extremely harsh rules of radical Islam (how they treat women and homosexuals) provide a similar example. One of the “attractions” of the “everybody pays his dues” (or "rules of engagement") view of authoritarian morality can be that some people find it easier to adhere to what their moral or religious teachings tell them to do if and only if they believe everyone else must do the same things. There is a tendency still to look at people as if they could be measured against moral and performance norms, inviting debate equality as a morally absolute necessity.

Between, and perhaps triangulated to these views, is the idea that everyone needs to have skills to enable them to “step up” to meeting the needs of family or community around them regardless of their own “choices”, and these may even relate to gender; but they should not be controlled by legislation. Instead, everyone should accept the idea that sometimes the family or community is more important than the narrow self and be prepared for the “step up.” In this sense, there can be no expectation that life will always be “fair” or “just” at an individual level, but there can be freedom, which makes it possible to approach justice gradually as a long term shared goal. That’s more commensurate with Christianity and ideas of Grace. In fact, both hyperindividualism and authoritarianism can become expressive of a certain kind of Calvinism, even Puritanism; I recall a question about this matter on my English final exam my junior year of high school!  The need to "step up" holds an emotional component (apart from evasie "upward affiliation"); in a technology-driven environment where attitudes become so public, what used to be seen as harmlessness or indifference may now come across as hostility or even contempt.

The idea of shared vision, introduced particularly by Rick Warren but also by others (Carlson and Mero and the “natural family”, for example) may indeed be essential for stable freedom, but of course “sharing communities” do need leadership, and leadership can easily become corrupt and self-serving. That’s one of the great things about individualism and the proliferation of individual goals (and associated speech) – they tend to interfere with group corruption.

People who are “different” (that often includes but is by no means limited to gays and lesbians, and those with less conventional social skills such as those with Asperger’s or “schizoid” personality (a term sounding much worse than it is) have good reason to fear calls for more attention to collective vision and social goals. Although “they” are often capable of achieving worthy goals and making unusual contributions when left alone, they are particularly prone to being singled out for “sacrifice’, although the retort is that if this is not done, people with “normal” family responsibilities will “sacrifice” instead.  Along with the "sacrifice" issue is the experience of subservience, which may be very great for the "different person" when external demands are imposed; "subservience" is not the same thing as psychological yielding (and "submission" is a double-edged term, too).   The "subservience" is experienced partly in terms of demands from family leadership that the different person develop patterns of familial affection dictated by others, making the person subordinate to the needs of the marital or reproductive relationships of other family members.  (Hence the notion of "second class citizen", however variable in the eye of the beholder, or even "family slave".) The coming eldercare “train wreck” may well bring this problem out. People who did not have children or take on intergenerational responsibility suddenly find themselves singled out and compelled to do so (although sometimes there can be unelected rewards, such as inheritance). One point of the "purpose-driven" or "natural family" movment seems to be that individual accomplishments are meaningless until one has earned the "right to the floor" by taking on family responsibility as one's first internal priority.
Posted by Bill Boushka at 2:20 PM