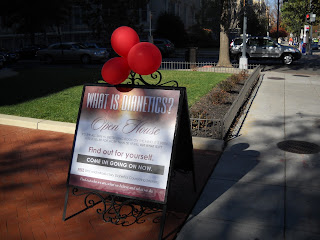 I remember that right of the outset of the Disney animated 3-D film “Chicken Little”, that Little’s daddy chides him for putting “the sky is falling” all over the Internet and making a fool of himself and therefore his whole family. (Whoa, online reputation defender again!)

I track the “catastrophism” movement and do write a lot of posts warning “us” about all the loopholes in our lives, ranging from legal ones (my favorite “implicit content” concern, as well as the DMCA sieve that resulted in Righthaven) to manmade catastrophes (bioterror and EMP) to natural apocalypse (the Cumbre Vieja volcano, and the latest fad of a 2012 storm of coronal mass ejections, as in Lawrence E. Joseph’s new book “Aftermath”, and, yes, I will review it soon; sorry).

Okay, then I can say “I told you so.” If I’m still alive, or if there still exists a power grid and an Internet so people will “find it”. Or, maybe “It won’t be so bad after all.” But maybe it will. I have a friend in Minnesota who loves to say we have had too much freedom, are due for a Purification and mass expropriation. But the radical Left used to threaten this all the time.

I’m quite struck by home much all this disaster talk attacks introverts. Most people who make revolutionary innovations do a lot of their work alone, without anyone’s permission. Yet, the rest of the world’s “average joe’s” regard such “troublemakers” as slimeballs or parasites. A world with no power grid will not have Facebook, and it’s owners will be brought low like the rest of us, maybe. Well, it won’t have “do ask do tell” either. The fact is that civilization has always nurtured a certain ethical paradox: it needs to get people to make risky social commitments (so they can marry and make babies and raise the next generation), but it needs people who relish creating things on their own, too. It needs egotism and “selfishness” and even a pinch of contempt (Zuck’s “they ‘trust’ me”!) just as it needs social cohesion and solidarity. And, if we do have to start over in 2013, it will need them again if we don’t wind up like the Neanderthals next time around.

As for the "introvert advantage", I guess the Smallville show got it right: be "different", but don't think you're "special."

As for "do ask do tell", I do think it's useful that one person keeps track of all the loopholes in our wired world that can take us down. (I guy at the movies ["Inside Job"] says about my blogs, "I'm glad somebody keeps track of what is going on.") Because rather than having a family disaster plan (and accepting the idea that every one must have a family, or be assigned one), I think that most apocalypse can be avoided, even the very catastrophic disruptions of EMP or CME.   Hopefully, the more people know, the more likely it is we will do something about it. That gives a technological civilization better odds than the Amish or Luddites. I hate to see us blow it and wind up in a world that has no use for the likes of me. I don't think we could stop an extraterrestrial attack (like "Skyline" Nov. 12).
Posted by Bill Boushka at 6:28 PM