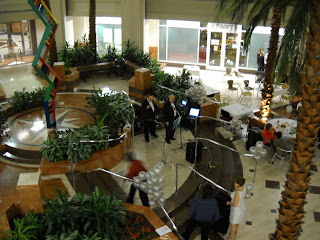 There’s a lot of controversy over Facebook’s “Gmail killer” but the most curious is the idea that people have a “cognitive load” in remembering “hands separately” (from my piano background, thank you) how each of your hundreds of “friends” prefers to be contacted. That was Fred Yager’s take in Consumer Affairs in a recent post here.  Other sources describe Facebook's announced email service as like the digital map of a telephone company switchboard.

The comment demonstrates the notion that Zuckerberg sees his invention more as a way of modeling and mapping social relationships (and encouraging them to “multiply”) than in publishing new connections in political debate (which was my concern as I took to the Web (1.0) in the late 90s after publishing my first book). That actually could have legal significance down the road in some matters dealing with implicit content.

There's no question that Facebook will face even more questions about privacy and preventing spam in its new service.

Psychologists, however, say that human beings have the ability mentally to know about 150 people well. Not thousands.

What’s curious is that I found an email app on Facebook provided by JSupra, a legal services firm, with the motto “give content, get noticed.” The Email signup page on Facebook seems to be here.

A Neptune,  New Jersey pastor advised married members to give up Facebook to avoid extramarital temptations, "Thou shalt not Facebook", link here.  Married church officials who refuse to dump Facebook will be forced to resign their jobs.  So, stay single?


Rob Pegararo’s "Fast Forward" column in The Washington Post Nov. 15, titled “With ‘Messages,’ Facebook tries to run the Switchboard”   offers constructive criticism, especially about the lack of subject lines.
Here is PCWorld’s YouTube video giving a “first look” at Facebook’s messaging service. It seems to be about speed (for kids), not accountability.