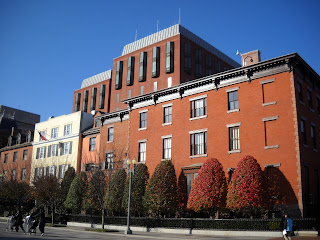 MSNBC suspended another host, this time Joe Scarborough, anchor of the Morning Show, for two days for giving $500 a piece to a number of friends and/or family members running for local offices. He said he did not cover the races of these friends on his show.

A typical story is by Kenneth P. Vogel, here.

Recently MSNBC has suspended Keith Obermann. And NPR had fired Juan Williams for “biased” remarks on the air.

The Scarborough suspension is raising questions about the policies of news organizations banning their anchors and sometimes employees from political activity and even commentary. MSNBC has been strict in its policy regarding political donations, even though it is viewed as much more liberal than the NBC network itself; Fox has no such policy.

One problem is that some news reporting does show a mild amount of political or social “bias” even though being thorough and “objective” by most standards of judging content. For example, Anderson Cooper’s AC360 “Keeping them Honest” probably shows a “mainstream” liberal bias; Cooper’s own views certainly come through the way he questions some “guests” and choice of topic, as in recent coverage of Internet anti-gay bullying. And many newspapers are known to have a certain political bias, such as the strongly conservative Washington Times.

Concern remains that the ban on partisan or biased behavior could spread into other areas, such as personnel areas in the workplace, such as with managers or underwriters.

Joshua Greenberg has an interesting perspective on the New York Daily News site "Keith Olbermann's suspension by MSNBC was right - but there's a double standard" here, by Joshua Greenman, who writes  "it's probably time for the network to write new rules for those who function primarily as critics and cheerleaders rather than objective observers."  But in the HR world you would have a similar difficulty in deciding what kind of reporting relationship could affect a manager's or professionals's permitted blogging or online activity.

TJ Walker comments on the Scarborough suspension and news organizations policies here. Walker says Scarborough is paid to perform as a commentator and to "be biased".  He says MSNBC is "out of touch."