"Tommy" and "John" are two first names, maybe with double entendre, dreaded by the Washington Nationals 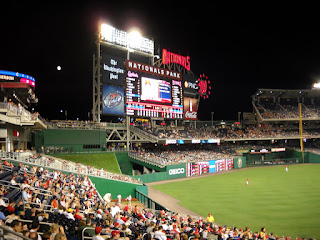 The last year that I lived in New York, 1978, the Yankees had a sensational pennant run (the Bucky Dent home run in Boston in the last game) and chomped the Los Angeles Dodgers in the World Series, I used to hear the phrase “the bionic arm of Tommy John”, who pitched for the Dodgers then and whose reconstructive elbow surgery was still a bit novel.

People say that teenagers are having Tommy John surgery now. I don’t think insurance will pay for it. But in the case of the Nationals’ Stephen Strasburg, it seems like a case of just too much velocity in an arm, at 22, not 100% physiologically mature.

Cliff Cororan, of Inside Baseball, on CNN (and Sports Illustrated), probably has the best perspective: “What type of pitcher will Strasburg be after Tommy John surgery?”, with link here.  The record is encouraging. Some of today’s stars, like Tim Hudson of the Atlanta Braves, have come back from it. Jaime Garcia, of the Cardinals, who faced the Nats last night and beat them (I was there, and must say that the Nats did themselves in on the field and with some baserunning mistakes) is also on the list.

Technically, the medical procedure is known as “ulnar collateral ligament (UCL) reconstruction”. The figure-8 tendon placement (from elsewhere in the body) adds stability and reinforcement to the joint. It’s rather like strengthening a span on a bridge.

Dr. Josh Dines and Dr. Rock Positano have a perspective in The Huffington Post, “Tommy John Surgery Epidemic?” link here.
The Associated Press has a YouTube video of Strasburg’s interview:

It was fun while it lasted. (Cynic!)
Posted by Bill Boushka at 7:06 AM