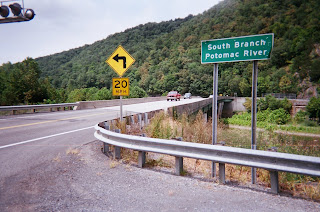 The Washington Times Commentary section Monday (Aug. 16) offered a synoptic letter by Frank Perley, “’Sustainable’ rules the Web; Ideas of endurance proliferate daily”, link here. The notes the millions of hits that come up on the word “sustainability” with almost any search engine. I’m sure that some of those nine million hits are on my blog postings.

The most obvious context of this word for most people now probably comes Al Gore’s litany about inconvenient truths, leading off with climate change and fossil fuel depletion, and environmental degradation (we can interpret the BP Deepwater Horizon oil spill in more than one way). Add to this is a collection of sudden unpredictable perils: some being man-made (terrorism), and some periodic natural catastrophes (even on planets without tool-toting life), like pandemics, supervolcanoes, asteroids, and even (according to the History Channel last week), massive solar storms (“coronal mass ejections”).

The Times piece spends some space on the population demographics issue, noting that it can lead to political unsustainability undermining democracy. We’ve seen this from the “Right” a lot lately and there is something to it. And it (in combination with longer life spans) certainly feeds into the “sustainability” of our old age systems, both public (Social Security and Medicare) and private (401(k)’s and pensions).  Another important, if speculative, concept is that childlessness may make a person less interested in "generativity" aka "sustainability". (See the Aug. 9 posting on the "parent trip" on my "Major Issues" blog.)

On the Web, what we’ve seen is rapid evolution, from self-publishing and e-commerce to social networking and connections through all kinds of micro applications; yet in time we will have to think in terms of an Internet infrastructure that, while so connected to personal opportunity, is getting perceived as a “free” utility. But what seems “free”, both to publishers and consumers, is really “paid for” largely by advertisers. So don’t complain too much about commercials. Back a few decades ago, they paid for your “free” broadcast television, especially sports events above everything else. (Remember how it used to be: most “home” major league baseball and pro football games were blacked out, and most road games played on the idiot box, allowing fans to see their heroes lose without home field advantage.)

The other big question of sustainability on the Web is covering systemic but unpredictable risk, associated with “amateurism” and reputation damage, because the “free entry” model and instant “speed of light” dissemination (yup, it wouldn’t be so quick once we have people living on Mars or Titan) eliminates pre-publication review by third parties in most cases. We’ve talked about the somewhat feeble insurance plans, and wondered if someday politicians will try to make them mandatory (just as with individual health insurance).

Sustainability is also a challenge to individualism and personal autonomy, so predicated by the absolute right to consent or not consent to addressing the emotional needs of others (that is, even consent to entering relationships where it is agreed that they will be met). In the modern secular world, morality has been narrowed to absolute accountability for the self. (Look how that led to the “pre-existing conditions” problem in health insurance, for example.) Older moral models insisted that people were accountable to their families and communities, in terms of complementarity, beyond what could be subsumed by their choices; capacity to function as part of the group had been a fundamental moral requirement. In the upcoming future, where there is some talk of localization and scaling back from globalization (which provides a curious paradox: we must accept economic interdependence in order to remain personally independent), older systems of moral thinking could make a return. History tends to repeat itself and run in cycles.

One other thing: yesterday, in my retrospect about the fantasy novel “Imajica” by Clive Barker, I should have added that one of that “English literature” modern author’s favorite concepts is “Reconciliation”: that people living in separate universes must eventually come back and live together. (I wonder if any English Lit professors have asked final exam questions about “Reconciliation”.) The “New World” provided a “Reconciliation” in the 17th Century, and the demands of “sustainability” may require people with very different cultural temperaments (such as those driven to urban exile and childlessness in the past century) may have to come back together and share responsibilities in previously unthinkable ways.
Posted by Bill Boushka at 1:42 PM