"Blogging policies" are called "social media policies"; rules of the road to avoid getting dooced 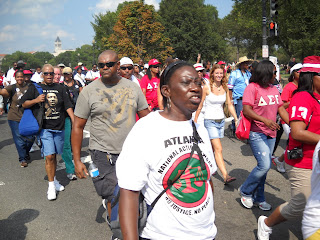 Now, the term employer “blogging policy” is changing to “social networking policy” or "social media policy", where it’s understood that the policy covers what a person can publish from home as well as use of work computers. Tech Republic has an excellent guide “10 Things You Should Cover in Your Social Networking Policy”, by Debra Littlejohn Shinder,  here,  as well as a sample policy: rules of the road to avoid getting dooced.

The most interesting provision may be #7, “Terms of Service”. Many social networking companies, apparently including Facebook, discourage pseudonyms or fake or multiple identities. Therefore, the proposed guidelines says, companies should not require anonymity or false names, just to prevent happenstance association. (Note: California and other states are considering laws against “e-personation” anyway. ) Companies may want to prohibit the person’s mentioning or naming their connection with the employer, however.

In fact, in practice, #5 seems like the most important (“referring to clients, customers or partners”), in addition to the “obvious” (protecting trade secrets and copyright) . That would be particularly important for consultants sent by staffing companies to client sites. I would add “other employees” to that list. One concern from some employers would be prospective: a person may feel free to talk about the job after they leave.

Practically all publishing and social networking services allow users to “whitelist” most content, that it, keep it available to only known lists of users or “friends” with “privacy settings”. I don’t see mention of that concept in the guidelines. But some employers and others would object to the idea that the person seeks the “limelight” from search engines when not competing in a normal way, with third party supervision, to “get published.”

I think that the notion of “implicit content” – that is, the “motives” for publication perceived by an audience, is a particularly sensitive issue for anyone with direct reports, or with authority to make underwriting decisions about customers or to “grade” students. (In the past, before social networking sites came along, I had written that such individuals shouldn’t blog in a free entry, searchable environment at all; that view seems to be receding. However, for management the “implicit content” issue could generate “hostile workplace” legal concerns very quickly, and inadvertently.) The free speech rights of teachers (and students) has been controversial, as they have to be balanced against possible (even if unintended) disruption of the school environment by how students perceive the content (and attribute its purpose) when they find it at home. (See Aug. 6, 2010 posting here.)

Even government agencies (for example Census) now are issuing social media policies for employees; some have pre-publication review policies as well, and these might sometimes cover personal blogs.
Posted by Bill Boushka at 6:26 AM