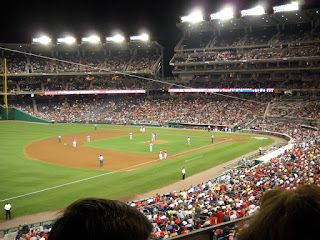 One of the interesting things about the major leagues is that “home field advantage” really means something. Only the home team has a chance for a walk-off win, and just ask any visiting team to Boston’s Fenway Park what it’s like play on the road. (I've wondered if the rule that the visiting team bats first will ever be challenged. I think it is when suspended games are completed on the road, or a game has to be made up on the road at the end of a season.)

Other games have their version of playing at a slight disadvantage. In chess, everyone takes turns playing White and Black.

So one can say that about life. Some things that one has to deal with don’t involve one’s own aims or goals, they are set by others. This all seems to create a daisy chain.

“Real life” and intellectual honesty do seem to be at odds sometimes. Just look at this op-ed by David Brooks in the New York Times, “A Case for Mental Courage”, link here. He writes “But, in general, the culture places less emphasis on the need to struggle against one’s own mental feebleness.” And later, “There’s a seller’s market in ideologies that gives people a chance to feel victimized. There’s a rigidity to political debate. Issues like tax cuts and the size of government, which should be shaped by circumstances (often it’s good to cut taxes; sometimes it’s necessary to raise them), are now treated as inflexible tests of tribal purity.”

One can make a public career of sorting and connecting the “dots” and watching for skies that really will fall (of being a public “Chicken Little” perhaps). Then the question is, why doesn’t the speaker want to get involved in actually meeting needs before jumping on “the ideology of victimization” just to be heard from? And the answer sometimes is, it’s not easy to play on the road. And it doesn’t suit one’s pride to work for someone else’s perhaps less that intellectually pure objective than one’s own. In fact, it sounds like giving in to the humiliation of tribalism.

There's something else, too: one's own "ends" can relate to one's own worldview, which can take on a life of its own. One starts to understand that personal lives take on a public "meaning", which might affect what others get out of their own lives.  (Or get over it?)  I like to see people get what they earn or "deserve" as individuals -- but if that kind of thinking becomes an end in itself, it can take us out of individualism and freeodm toward fascism.

So, consider this: Former Naval Academy Midshipman Joseph Steffan writes (on p 143 of his 1992 Random House book "Honor Bound"), “Personal honor is an absolute-you either have honor or you do not..”[ I only give up my honor out of my own volition, even if somebody “makes” me (although it gets tougher if I lie to save a life in a hostile situation); and once I do so, I’ll never completely recover my own self! Perhaps Steffan is building on Shakespeare: “If I lose mine honor, I lose myself” ("Anthony and Cleopatra"). Honor is more than just honesty or its masculine analogue (in Rosenfels), courage. It seems to imply zero tolerance of dishonest acts by one’s peers. Integrity is an even more inclusive term or "class". Stephen Carter writes (in The Insufficiency of Honesty,” Atlantic Monthly, February, 1996, pp 74-76), “Integrity requires three steps: discovering what is right from wrong, acting on what you have discovered even at personal cost, and saying openly that you are acting on your understanding of right and wrong."  (See my book review of Steffan's book, Book Review blog, Oct. 10, 2007.)

What goes around, comes around.
Posted by Bill Boushka at 4:40 PM