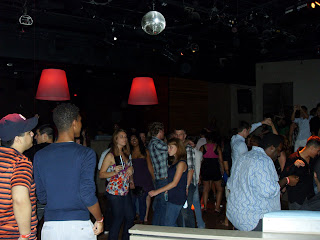 “Quantum ethics” sounds like a useful term to summarize the direction our “culture wars” is headed, for me at least.

Consider the practical reality that in most cultures (if only partially so now in modern western culture) married parents work to make all of their children feel bonded to the family and to some extent their surrounding local community. That means an interesting in being part of something – including biologically – more permanent than oneself, and it sounds “collectivistic” even if most of us buy the idea that a good family upbringing is essential to providing free and self-motivated individuals.  This line of thought does relate to notions like the "natural family" of Carlson and Mero, or of Rick Warren's "purpose-driven life" and the mantra "it's not about you." Even the Rosicrucians sometimes maintain that periods between "incarnations" are experienced in a group consciousness.

Bonding to the group accepts the idea that life is not always “fair” down to every individual, and accepting that seems necessary first for team play but later even to conceive of pursuing human rights and equality as we usually understand them today. But in an immediate sense, every individual has to live with an “uncertainty principle.”

Modern notions of moral problems tend to focus in assigning accountability and responsibility for individual acts (e.g. the BP oil spill still comes down to mistakes of particular individuals). But in earlier times they had a lot to do with fitting in to a community that had to continue itself as a whole.

One way to view earlier paradigms for moral thinking is to reflect on the concern that people not only start out at different places in line, but people tend to benefit from the unseen sacrifices of others. One way to mitigate this concern is to expect every individual to “pay your dues”, outside of what normally follows from a market economy.  If "station in life" means something and ought to be earned rather than assigned by fortunes of birth circumstance, then everyone should share certain kinds of intergenerational responsibility.

That gets back to what happened in my life: I had some specific intellectual and musical talents, but was sometimes hindered from deploying them because I wasn’t showing that I could compete to provide for a wife and (continued) family. In fact, a lot of what led to my college expulsion and “therapeutic” followup had to do with my disinterest in the natural and social activities of procreation and reproduction.

Recently I read the article “The Only Child: Debunking the Myths” in Time Magazine, July 8, 2010, abridged version link here . The full article stressed that only children (which I am) sometimes to achieve superior intellectual or artistic performance as individuals, but society seems to regard excess intellect in such circumstances as a pejorative, if it comes at the expense of socialization and compassion. What is good for an individual is not so good for society if it isn’t sustainable.

The article also discussed the economic pressures that led to more only children and to fewer children, including the idea that a technological society gives people (especially women and gay men) other outlets besides family life, disincentivizing family-centeredness and perhaps using socialistic handling of some issues (like end-of-life care) to give certain kinds of people a false sense of freedom, at the risk to long term social stability. This is the now well known “demographic winter” problem.

In my case, I was particularly driven into my own pursuits by being humiliated socially in the tween years when expected to “compete” with other boys in a conventional way, and I sometimes mixed up “competition” with “teamwork”. (Think how this plays out in baseball.) But I would resent anyone expecting intimacy from me on terms other than my own. If I had been humiliated as to my “gender deficit” (to quote anti-gay author Nicolosi), then I really didn’t want anybody looking at me as a father figure (as when substitute teaching) except on very carefully or narrowly drawn circumstances. That provides a certain irony (or again “quantum uncertainty” or twin paradox) with the idea of political and personal “equality”: I might get it in the law, and then resist really using it.

My most important goal in writing (my books and web pages) has been to get people to understand how our social moral foundation used to get built, as people today seem to have forgotten this completely. In the past, family responsibility came from being in a community; it wasn’t the result of a chosen act of sexual intercourse (as it is perceived today); it was flipped around; access to sexuality was granted to carry out responsibility and conferred authority over others (which could be abused). And the sustainability concerns today (especially the “demographic winter” issue) may take us back into that moral space. Gay marriage and allowing gays to serve openly in the military may actually work in synergy with bringing back the older idea of social contract.

But, of course, there is a disingenuity (if not hypocrisy) in making oneself visible without taking on the risks and responsibilities than others take, leading to the situation where others feel tempted to “dare” the speaker with challenges to accept unwelcome responsibility. For example, I might be manipulated into a situation where it’s actually essential that I be willing to function competitively as a new parent of other people’s children (without having engaged in the specific acts that could have created the responsibility), and then perform vocationally according to conventional competitive norms for men with families, such as manipulating others to buy things and giving up my own style of journalism.

In fact, the only way I could be a good role model is to finish what I started, to take the idea of a “do ask do tell” brand to its logical outcome.
Posted by Bill Boushka at 8:14 PM