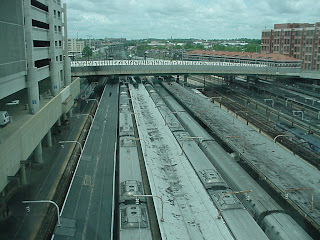 Police in various jurisdictions and local security guards (public and private) have been warning and sometimes detaining people to take pictures of public buildings and other facilities (like airports and railroads) legally, according to a Metro Section story in the Washington Post today Monday July 26, link here. The story is titled “Freedom of photography: police, security often clamp down despite public right”.

The article has some examples of pictures that have led to trouble, including one of railroad tracks from inside Union Station in Washington, similar to one I have taken at an Amtrak “National Train Day”.  Since the DC area Metro has encountered so many accidents, people may want to take pictures of accident sites and of the "scenic" Metro Yards north of Union Station, but Metro seems to be allowing this without complications.

Police and security guards have often not been trained on the law, and sometimes believe that they have the power to stop anyone whose photography activity could imaginably relate to terrorism.

The overwhelming majority of outdoor photos in Washington and New York are related to tourism or to subject matter that bloggers consider interesting for any number of innocuous reasons.

In March 2005, Reader’s Digest ran an article by Michael Crowley claiming that some people were publishing photos of vulnerable spots on buildings in order to make them targets for terrorists, and that any site that did so deliberately should be taken down. The title of the article was “Outrageous! Let’s shut them down! These websites are an invitation to terrorists,” in the magazine’s “Your America” series, link here----lets-shut-these-websites-down/article19203.html

There is a degree of common sense required in looking at this issue. Just because someone can take a picture of make up a scenario doesn’t mean that there is any real chance it can happen. (Look at the ending of the movie “Salt”; does it endanger the White House?)

There has been a controversy over taking pictures around oil industry facilities since the BP Deepwater Horizon accident drew journalists’ attention to BP’s history in the past. "Lone Star" journalist Lance Rosenfield (site) as detained by security forces after taking pictures near the Texas City refinery, as in this CNN report with Soledad O'Brien on Youtube

as originally shown in the "Gallagher Photo" news story here .
Posted by Bill Boushka at 11:17 AM