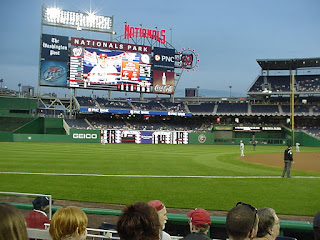 Remember in the pilot episode of “Smallville” in 2001 that the young (freshman in high school) Clark Kent (Tom Welling) wants his “adoptive” father to sign a permission slip for him to play football, and his father at first refuses because he wouldn’t know his own strength. In later years he does play, and physics teachers can have fun making test problems over the parameters of his catching his own forward passes because of his “speed”.


Smallville never experimented (as I recall) with Clark’s playing baseball, let alone pitching; so last night Washington Nationals rookie sensation Stephen Strasburg satisfied our expectations to see Superman in a 5-2 victory for the Nationals over the Pittsburgh Pirates. His first pitch was a ball, but his first strikeout was the third batter. He struck out 14 in 7 innings, at a pace equal to Bob Feller’s 18.

How will Strasburg do at the other end of the Pennsylvania Turnpike, against the Phillies?  (They're that good.)

I do remember the 1950s when the old Senators struggled with Ramos, Pascual, and Clevenger. But when they moved to Minnesota, Pascual became an ace.

I remember a Friday in May, 1959 when I pitched a softball "shutout" (4-0) in gym class (with a "one strike rule"). The gym teacher called me "shutout Boushka".  I even hit a ground ball home run (no enclosed field).  The Senators lost in Boston that night, 4-3.  I still got a C in gym.

(Above Picture: from game I attended at Nationals Park in 2008.)

Wikipedia attribution link for new Target Field in Minneapolis, home of the Twins (the Washington Senators until 1960). 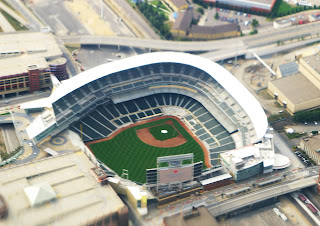