Soldiers generally are left alone as to personal Internet use; Debate erupts on whether president should have emergency power to pull plug on civilian Internet use 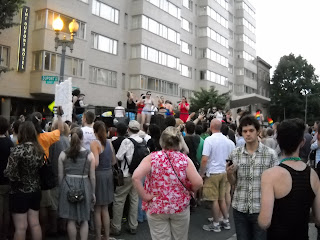 I had a random conversation on the Metro this morning (triggered by a newspaper headline about McChrystal, previous post) with a young Army officer, going to work at the Pentagon, in neat fatigues. Although he could not be specific, it appeared that he worked in the area of military cybersecurity or cyberwarfare.

We talked about Facebook and privacy controls, and also the “pre publication review” supposedly expected of all publications or Internet postings by people with sensitive jobs. However, he said that normally the Army does not restrict of monitor Facebook, social networking, or blogging by soldiers done on their own time with their own computers, even if (as President Clinton even admitted in 1993), a soldier is on duty “at all times and in all places”.  Many soldiers blog from combat zones, providing first-hand "Hurt Locker" journalism, although commands vary on how much of this they alive.

However soldiers do get in trouble if they compromise security or specifically misbehave on the web.

Obviously, gay soldiers might violate “don’t ask don’t tell” on Facebook, but it seems that often when soldiers do so, nothing comes of it in practice. In its review of how a repeal of the policy would work, the Pentagon would clearly have to consider both military and personal computer use.

Apparently McChrystal did have to resign today. The whole incident provides a lesson in the “viral” nature of today’s media where even relatively obscure (previously) journalists can bring someone down.

A discussion with someone apparently engaged in preventing cyberwarfare brings up another issue, a proposal (or bill to be introduced) giving the president the power to cut ordinary people off from the Internet in a cyber emergency. It sounds all too easy to abuse. America’s soapbox has a thread on this issue here.
Posted by Bill Boushka at 2:45 PM