MSN provides panel discussion on social media and "the former right to privacy"; will Section 230 come into question? 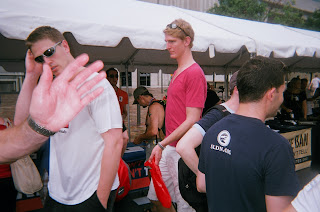 MSN has a “Play it Forward” (“Play It 4-Ward”) video with a wide-screen panel discussion with Laura Swisher, Peter Eliasberg, Rachel Armstrong, and Andrew Keen (“Digital Vertigo”, “The Cult of the Amateur” [the latter reviewed on my Books blog June 16, 2007), hosted by Peter Hoffman, on “the former right to privacy”. The link is (web url) here. Social media here includes everything: Facebook, Myspace, Twitter, Blogger, Wordpress, even the capability to have conventional sites like my doaskdotell.com. It really incorporates all of the social, publication, and self-broadcast (or self-promotion) components.

The question is, when someone else puts up on the spot in social media, particularly with videos or photos of you in public that you didn’t know were taken, do you have recourse? Who is responsible, the poster or the social media company?

Armstrong felt that this is a social issue, not a legal one. The fundamental problem is that people in different communities have different standards of social acceptability. If you’re an Olympic swimmer, you should realize that it you do a bong hit at a party, someone might take a picture of you and post it,

Rachel and Laura felt that there should be a “technological watershed”: pictures taken before the age of the Internet should be off limits for posting without permission.

Keen feels that social media companies should be held responsible, because they make such enormous profits on other people’s content. He says we need a new “creative class” to monitor content and provide a conduit to its being posted.

Eliasburg pointed out that we have laws now (Section 230 of the 1996 Telecommunications Act) which generally protect media companies. Individual posters might be held liable for defamation or invasion of privacy, but a posting of someone taking a drink in a public place isn’t really an invasion of privacy generally. The problem is the ease with which images and content get posted and the lack of supervision, compared to the past. Yes, uncontrolled self-promotion comes into play. (In his 1997 novel “Sacrament”, author Clive Barker had thrown around the term “self-promoting queer”.)  Eliasburg admitted that maybe there should be a legitimate debate in Congress as to whether Section 230 should be changed (he didn't call it that), but if it were repealed, the "free entry" system allowing ordinary people to post content without supervision would come to an end, and we would have to go back to an older world where "getting published" is a big deal and requires the approval of third parties (who usually need to be able to make money with your content, so you have to be compete in a more conventional manner first).

And there is another problem, the varied social standards. If you’re in the Army and someone posts a picture of you dirty dancing in a gay bar, that might be a problem (until “don’t ask don’t tell” is repealed). If you teach in a Christian school, again, the same problem. So I wouldn’t take a job where it’s a problem. But I did have my own “implicit content” problem (see July 27, 2007 on this blog).

But I have to disagree with Keen to a point. If a soldier gets discharged for being openly gay because of a Facebook picture, even posted by someone else, it’s the DADT policy that is at fault; not Mark Zuckerberg or his company.

Along these lines, the Prince Georges County MD school district has promulgated rules saying that students, teachers and employees may not post pictures or videos taken on school property even from home and even with their own computers on their own social networking profiles, blogs or websites.
Posted by Bill Boushka at 5:48 AM