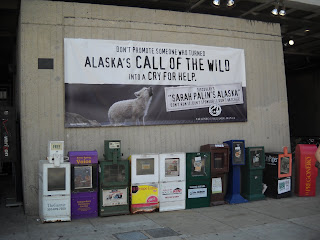 First, here is Michael Hastings’s article from Rolling Stone, due to hit newsstands on June 25.

The title is “The Runaway General: Stanley McChrystal, Obama’s top commander in Afghanistan, has taken control of the war by never taking his eye off the real enemy: the wimps in the White House.” Supposedly Hastings, pretty young and prim himself, got the chance to interview McChrystal because of disruptions to flights caused by the Iceland volcano.

Salon has a take on this (Alex Pareene, “How volcanoe booze got the McChrystal story, and how Rolling Stone lost it”, link here  ), explaining the wayward path to Rolling Stone’s online publication of the issue, even to the point of commenting on the Huffington Post. (Salon writes “The Huffington Post's business model is, of course, built around appropriating the content of others, making all of this a bit rich.”)  Note: the Rolling Stone article didn't come up directly to me this evening from Bing, but I had no trouble finding it.

My personal interest in all of this could be summarized as “conflict of interest.” Can you ethically bite the hand that feeds you?

I faced a situation back in the 1990s, when I was working for a company that specialized in selling life insurance to officers of the US Military. Since I was going to write a book about (in large part) “don’t ask don’t tell” and would have to present myself as morally unfit to serve in the view of some (even though I had actually served in the Army without incident 1968-1970), I felt that I should not be earning my living from that customer, and that certain other conflicts could exist. So I took advantage of a corporate merger and transferred to a job in another city away from that customer base. But later I would be challenged as to whether I could live up to this kind of thinking.
Posted by Bill Boushka at 7:51 PM