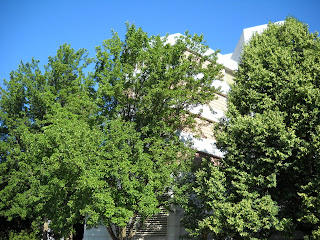 The Digital Media Conference East had its seventh annual conference today, still June 25, six months after Christmas Day, this year on a Friday. It was held at the McLean Hilton (in Tyson’s Corner VA), which looks a little less palatial than the Ritz Carlton. But since it is smaller it is simpler to park and walk and carry stuff to the event. Go to this link to see the complete schedule and names of all speakers.

The conference opened with a panel briefly presenting “top digital media trends”, this most important of which (mentioned right off the bat) was mentioned on this blog yesterday, more self-policing by Internet marketing businesses. 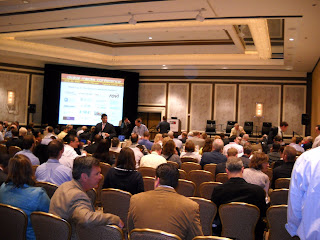 Then Kelly Day, of Discovery Communications in Silver Spring, presented the topic “The Value of Brand in a Google World.” She went on to discuss branding and video production, and the use of video to provide synergy with text content, as well as an identity for the media publisher. She showed clips of two videos from Discovery-owned TLC, “The Sauce Boss” (cooking), and “Conception Story”, about a Virginia couple’s struggle to have children (ironically, I had written about both the AFI Silverdocs festival, to which Discovery is a major partner (on my movies blog) and about a CNN documentary about gay surrogate parenting yesterday on my TV blog. Her motto was “Brand + Science + Scale”.

The Social Media Track was probably the most important of the day, and it started with a panel on “the State of Social Media”. There were two major sessions on advertising or marketing and social media. Many interesting points were made. Facebook, for example, has master “mapping social relationships” of a two-way type, but other sides, like LinkedIn, have master one-to-many relationships. Consumer relationships depend more on the concept of “web of trust” and “admiration”, were as business-to-business relationships are more strictly “technical”.  Marketing today is much less about technical gimmicks (like pop-ups, which have become objectionable and intrusive), than with blending selling with legitimate, informative content and video (reinforcing a point made in Discovery's presentation). Marketing today also represents a real shift from the dot-com boom and bust; we don't have "pets.com" as we once did (not as a retail store -- it is there as an information site, encouraging commerce indirectly -- that is "the point".) 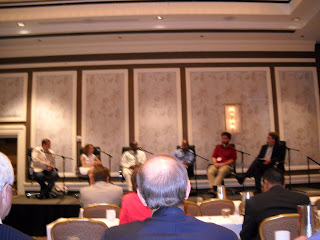 But the most serious topic of the say came up in three sessions, the Boucher bill, which started getting talked about in early May. This bill would restrict the ability of advertisers to collect information from web visitors without very conspicuous consent, and some people maintain that the Bill could gut the “free content” and low barrier to entry web as we know it today. I will look into the details on this bill and report on another posting soon. Here is one account of it May 12 by Washington Post technology writer Cecilia King; more references will follow on this blog soon. One speaker expressed the viewpoint that the rules in the "bricks and mortar" world regarding misuse of PII (personal identifying information) and mail promotions (as when credit reporting companies sold info in the pre-Internet days) is sufficient already; and by and large Internet marketing companies are not really using PII; they are creating their own identifiable market-to units. Another expressed the view (or hope) that the Boucher bill won't go far.

There was a symposium called “Content in the Cloud” and the protection of intellectual property rights. At the end, there was a warning that the mass "spamigation" lawsuit by the US Copyright Group could force innocent P2P users to defend themselves based on flimsy evidence that they had infringed. I wrote about that here on March 31. Today, this was the only meeting on the “Law & Technology Track”.

NPR (National Public Radio) presented its COPE (Create Once, Publish Everywhere) strategy, which makes heavy use of XML, to place the same content in various media, including Audio, iPhone, and Android. It also allows bloggers non-commercial embedding, as long as certain protocols are followed to ensure that sponsors get proper credit in the embeds.

During the lunch break, Comcast explained its Xfinity brand and its Spotlight service for flexible advertising applications invoked in web-like manner from web tv or cable-box technology.

As a whole, the digital media business still seems focused on versatility and monetization, which, in terms of “karma”, is needed to support the “free content” and “free entry” environments of the Internet. Sometimes it overlooks the existential side of attempts to regulate (as with the Boucher bill above), or even sudden practices by business, such as at least one homeowner insurance company’s plans to surcharge users of social media. 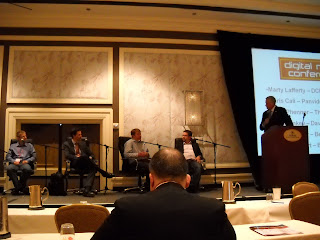 There is still a perceived dichotomy between "self-publication" (or self "broadcast" or "self-promotion") which seems now to have a less positive foothold as a motive for social media use, and actual social interaction, which is perceived as more indispensible and less vulnerable to motivational challenge.
Posted by Bill Boushka at 5:42 PM