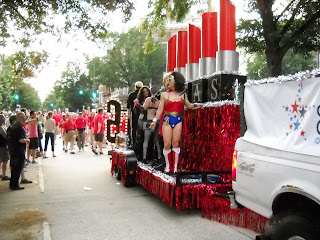 Back on May 16, 2010 the Washington Post had run a story by Annys Shin about a new “culture clash” in Washington, between childless adults and parents with children, in public spaces. The story referred to the return of families with young children to urban areas, with link (web url) here.

I remember back in 1983, at an old President’s Health Club in Dallas, that a toddler was playing on an outdoor jogging track. I complained to the parent, who said that the child had as much right to be there as I did. Now, health clubs quite reasonably don’t allow children (at least pre-teen) in some areas so that adults can work out safely, without endangering either their own or other people’s children. She was overrules.

The story boils the culture clash down to young parents remembering how they were before they had children. It’s more than that, though.

In numerous workplaces, the childless get the last pick on work hours, or are sometimes expected to do on-call duty for those with kids. (Yes, Tory Johnson, jobs guru on ABC News, says that this practice is wrong.)

Back in 2000, Elinor Burkett wrote a book “The Baby Boon: How Family Friendly America Cheats the Childless”, and quotes proponents of perks for parents as dismissing the relative “injustice” of the perks as part of “living in a community.”

But in 2008 Phillip Longman (“The Empty Cradle”) and David Gray published a piece “A Family-Based Social Contract” (link), opined that government policy still cheats families, and wrote at one place “The same point applies to low-paid caregivers and educators, most of whom could increase their incomes simply by getting out of the “nurturing business.” Indeed, as a rule, the adults who sacrifice the most to create and mold precious human capital retain only a small share of the public good they create. Those who devote themselves full time to raising their children receive no wages, and no additional support from government in old age.”

In other words, according to Longman, the childless get a free ride on OPC, “other people’s children.” Back in the 1990’s, there were a number of movements like the “Child Free Network” and “No Kidding,”, which had prompted an angry comment from Allan Carlson, author of “The Natural Family: A Manifesto” (2007): “These (No Kidding!) people are copping out on the future, refusing to accept the standard obligation for responsible membership in our society. I would describe them as childish, immature and irresponsible” (see the Books blog, Sept. 18, 2009 (Carlson) and March 28, 2006 (Longman).  See also my "Issues Blog" March 8, 2009 and Feb. 20, 2008.

All this brings us back full circle to another Washington Post article on Sunday morning, today, June 13 (Pride Sunday, ironically), by Post Ombudsman Andrew Alexander, “Still loose with anonymous sources” , p A13, link here  He starts out by mentioning the seemingly trivial story about a clash in a public park over “other people’s children” as quoting a woman who wanted to be identified by her first name only because she didn’t want to be publicly pilloried as “hostile to children.”

Alexander goes on to criticize the Post and other newspapers as too loose in protecting anonymity, as a cultural thing: it seems that we still have vestigial cultural remains of the notion of “keeping a low profile” to protect your own (others in your own family), which can go way beyond just your own children, which you might not have.  ("Why draw attention to yourself," some family members say; after all, you can make contributions to Wikipedia essentially anonymously.) It gets juicy. But, turn this around, and we have a youth and now even baby-boomer culture of self-broadcast in public (something almost essential in many career fields, even if done in a "responsible" way), confounding older notions of accepting the interdependence of established social ties, most of all “the natural family” or Carlson, Longman, Jennifer Roback Morse, and similar social conservatives.  Some of the problems with "online reputation" deal with the perception that people's reputations are linked through families and other associations.  The recent debate over Facebook privacy controls seems to carry this conflict into the technology of social media.
Posted by Bill Boushka at 7:48 AM